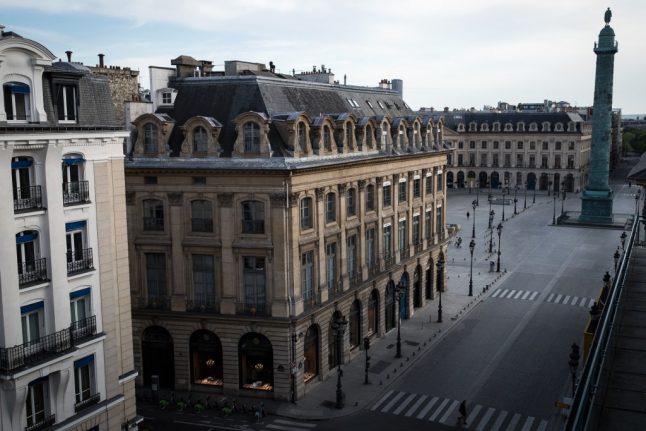 Paris has been looking like a ghost of its old self since the beginning of the lockdown on March 17th. Photo: AFP

Some 5.7 percent of the French population – roughly 3,7 million people – will have contracted coronavirus by May 11th, the day that marks the beginning of the end of the strict nationwide lockdown.

This was much less than the rate needed to reach any kind of collective immunity, according to the researchers from the Pasteur Institute in Paris.

“To achieve a sufficient level of collective immunity to avoid a second wave you need 70 percent of the population to be immune,” said one of the authors of the study, Simon Cauchemez, Head of the Mathematical Modelling of Infectious Diseases Unit at the Pasteur Institute.

The study, published on Tuesday April 21th, was conducted by the Pasteur Institute in partnership with the French public health institute Santé Publique France and research institute Inserm.

It represented the first scientific attempt to calculate the spread of the coronavirus across the French territory.

The entire report is available in English here.

One of the main conclusions of the study was that the lockdown had what Cauchemez called “a massive impact” on the spread of the virus.

The contamination rate had decreased from 3.3 to 0.5 since the lockdown entered into effect on March 17th, according to the researchers.

Up to March 17th, every person carrying the coronavirus contaminated on average 3.3 other people. Today that number was reduced to 0.5 – which is less than 1 and therefore implies a decrease of the epidemic curve.

The number of new patients being admitted daily to intensive care in hospitals had decreased from 700 at the end of March to about 200 mid April.

But the small percentage of people having been exposed to the virus could be problematic, the researchers said, as it meant few people would have developed immunity by the time the lockdown ends.

READ ALSO: 'Living with the virus': The plan for life in France after lockdown

The study confirmed big differences in exposure to the virus across regions.

In the Paris region Ile-de-France and the Grand Est (northeast), the hardest hit areas, the researchers estimated an infection rate of 12 percent on average.

In comparison, regions less exposed to the virus like Brittany, Nouvelle-Aquitaine or Pays de la Loire have reached a contamination level of less than 2 percent.

“The uncertainty level is high, between 3 and 10 percent,” Cauchemez told France Info.

But it did not really matter, the scientist added, as “whether it is 6, 10 or even 20 percent, we are far from the 70 percent we need to exit the lockdown without problem,” he said.

One of the main goals of the lockdown was to limit the spread of the coronavirus to ease the pressure on French hospitals.

As this goal has been achieved, the new challenge will be to exit the lockdown without provoking a second wave of virus infections.

The government will in the coming two weeks present a plan detailing how France will proceed to unwind its lockdown after May 11th.

Protective masks, increased testing and continued social distancing have been outlined as big lines in the government's deconfinement strategy.

READ ALSO: From revolt to lockdown – How the French are (mostly) obeying some of the toughest restrictions in Europe

The study confirmed that the lethality of the virus varies between age and gender.

“Men are at a much higher risk (50 percent) of dying than women,” Cauchemez said. This gender difference increased with age.

Is collective immunity even possible?

At the outset of the coronavirus pandemic, several countries – including the UK – stated that they would employ a strategy of achieving herd or collective immunity in order to be able to maintain economic activity.

While scenario of people catching covid-19 several times has been characterised as “unlikely,” researchers have not been able to say with certainty that achieving herd immunity is feasible.

He wondered “if we are not completely mistaken” in relying on the idea of immunity.

There have been cases in other countries that have pointed towards a re-contamination of the virus. However this could also have been people suffering a backlash after getting better, French researchers have said.

Cauchemez told Le Monde that, starting May 11th, France would need to “nearly continue the lockdown without the lockdown” to prevent a second wave from hitting the country.

“The objective is to be able to say, weeks advance, if we continue like this, what can we expect the number of hospital admissions to be,” he said.