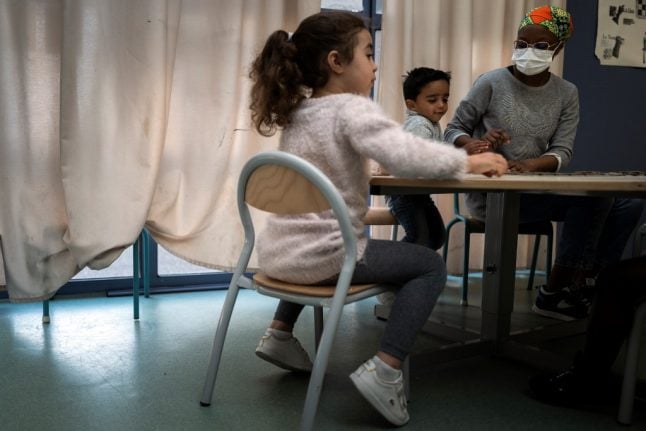 Only children of key workers have been allowed into school since the lockdown entered into effect in France. Photo: AFP

After three months of keeping their gates closed, French schools will begin to gradually reopen on May 11th, the date President Emmanuel Macron has outlined as the beginning of the end of the strict nationwide coronavirus lockdown.

EXPLAINED France's plan to reopen its schools after lockdown

When we asked our readers how they felt about sending their children back to school, many reacted by saying they were “worried.”

“I don't think it's a good idea,” Sorana-Monica said.

“Just the thought of it makes me feel more anxious,” Karina said.

“Not sending mine back to the lycée, it's madness, it's like playing Russian roulette!” Karen wrote.

Several parents backed this, saying they would not send their children back even if their schools opened.

“I am waiting to find out how they are going to keep children a safe distance apart before I make my final decision,” one mother said.

“They are 9 and 13, they have years ahead of them to be educated, so quite happy for them to be homeschooled until the virus is controlled to some extent.”

I am waiting to find out how they are going to keep children a safe distance apart before I make my final decision. They are 9 and 13, they have years ahead of them to be educated, so quite happy for them to be homeschooled until the virus is controlled to some extent.

On Tuesday, Education Minister Jean-Michel Blanquer gave a general outline of how the government envisaged the reopening of the country's schools to happen.

“It won't be like going back to normal,” he said, stressing that the process would be “gradual,” spread over several weeks.

Final decisions would be firmly anchored in local conditions, Blanquer said, with regional and local authorities having a big say.

Regarding protective measures such as masks, the education minister said the government would issue a national decision.

For some parents already suffering from pre-existing illnesses, the stakes were high.

That was the case from Barbara Diggs, a writer in her 50s suffering from chronic asthma.

Barbara, who lives in Paris, and said she worried about how her children would get to school. Both commuted by Metro – its usually crammed trains not ideal as a place to practice social distancing.

“I'm also worried about kids congregating once they're outside of school,” she wrote.

“They might be careful at first but it's hard to imagine them keeping a metre between them.”

Both unions and parents have expressed worry that children, especially the youngest, will not know how to respect measures of social distancing even in very small groups.

“We know that schools are a place of contamination,” said Francette Popineau, Co-General Secretary and spokesperson of the largest teacher's union FSU.
“When a child has wet his pants, a teacher must be there to help. When children play together, they touch each other,” she said, listing different scenarios where the so-called preventive gestures were not possible in schools.

“We need to be completely certain that this decision is safe and scientifically founded before we even think about reopen the school gates,” she said.

Nicola Cameron, a lawyer, teacher and parent, said it would be “an enormous responsibility” on teachers “to try to keep our pupils safe and to a greater or lesser degree ourselves.”

She said her 15-year-old daughter “feels extremely unsure” about returning to school, “despite being desperate to get back to some degree of normality.”

“It almost seems like teachers are the cannon fodder, to enable the economy to reopen and parents to perhaps “have a break,” she said. Homeschooling has been the norm in France since mid March. Some parents are longing for their children to go back to class. Photo: AFP

'I can't go to work if the kids are home'

Blanquer said parents would have the option of continuing to homeschool their children after May 11th, but did not specify how schools would verify if such a homeschooling was taking place or not.

Since school closed in mid March, many parents have been struggling to juggle working from home and trying to keep their children on top of their school work. For single parents especially, the task had proved quite exhausting.

By now, many parents were eager to get their children out of the house.

“CAN'T WAIT!” one Twitter user wrote to The Local. Will France be able to keep its schools coronavirus free after May 11th? Photo: AFP

“I can't go to work if the kids are home,” said Nate Caucutt, a father in Lorient, east of France.

Both he and his wife had jobs that did not allow for home working.

“France doesn't have much remote work capability, so I'm sure many parents are in the same situation,” he wrote to The Local.

I can't go to work if the kids are home.

His wife had gone back to work while Nate tried to help his 9 and 12-year-olds to keep up to date with their school work.

“Only one teacher hosts Skype classes for one of our kids. The rest is all independent study or learning with parents,” he said.

Most teachers email homework that children in theory should be able to do independently, but many parents have seen a lot of the burden fell on their shoulders.

“I enjoy helping the kids with their schoolwork, but not everyone is as fortunate as we are,” Nate said.

“If France is going to wait until September or later to try to reopen schools then there needs to be more effort online classes.”

Thank you to everyone who contributed to this article. Even if your story was not included in this piece we really appreciated reading your contributions.