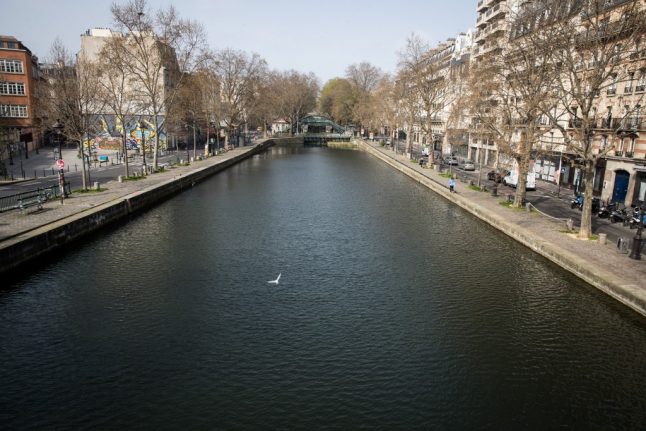 The Canal Ourcq, which runs through Paris. Photo: AFP

On Sunday, Paris City Hall announced that small traces of Covid19 had been found in the city's water.

While this sounds quite alarming, there are some things to be aware of.

1. It's not in the drinking water supply

The authorities were clear that the tests that found traces of the virus were in the city's eau non potable – non-drinking water.

The tests were done on water from the supply points for the city's street-cleaning trucks.

This water is taken from the river Seine or the Ourcq canal which runs through the city and is partially treated, but not to the same standard as drinking water. The water from these supply points is also used to supply ornamental fountains and ponds in the city's parks – although most of these are closed at present.

Paris authorities say they have stopped using this water for street cleaning while they run more tests. 2. The amounts detected are very small

Samples were taken from 27 water points and in four of them very small amounts of the virus were found.

“We are at the limit of detection points,” Laurent Moulin, microbiologist at the Eau de Paris research and development laboratory told BFMTV.

“We were able to find and confirm the faint trace of viral genome… We found 1,000 small pieces of virus genome per litre of non-drinking water, which is 3,000 to 5,000 times lower than the concentrations in raw sewage.”

It's actually not unusual to find traces like this in the water during an epidemic, as the virus enters the sewage system via the toilets of infected people.

Treatments plants remove most of it, but non-drinking water doesn't get the same level of treatment as tap water so some traces can remain.

“This is the case with every epidemic, which is why people say that you shouldn't bathe in rivers during major gastroenteritis epidemics, for example,” Paris deputy mayor Emmanuel Grégoire told France Info.

“There is no reason why coronavirus should escape the rule.”

3. There is extra testing

The water in Paris is fairly regularly monitored, but testing has been stepped up in the context of the health situation.

The traces would not have been found under the normal testing regime, but were picked up by the extra level of testing.

“If we hadn't looked, we wouldn't have found it,' added Grégoire.

4. Use of the non drinking-water network was suspended

Despite saying that the amounts are tiny, Paris authorities have temporarily suspended the use of the non-drinking network for street cleaning, over fears that the fine spray of water thrown up by cleaning trucks could be inhaled.