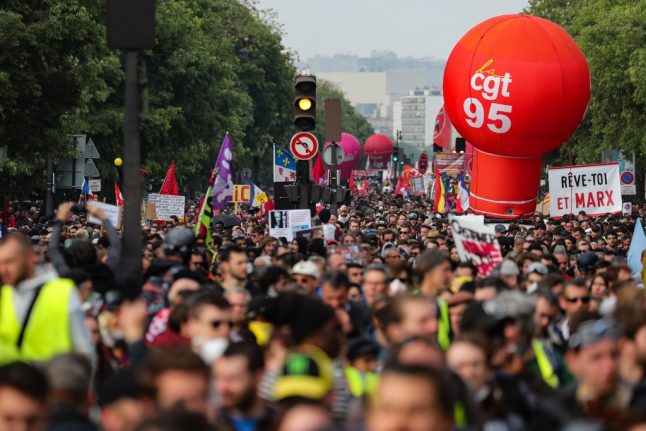 The traditional May Day demos will look a little different this year. Photo: AFP

May 1st, the workers' holiday, is usually a day of mass union-organised demonstrations in France.

But with no public gatherings allowed under the strict coronavirus lockdown conditions, unions are looking for different ways to honour the May Day spirit.

A group of seven unions have issued a joint call for 'balcony demonstrations' on May 1st, which is a public holiday in France.

“Even if we are confined, let's all demonstrate on May 1st with placards, banners or by invading social networks, and give this day a real collective strength,” read the joint statement from the CGT, FSU, Solidaires et les mouvements lycéens Fidl, MNL and UNL et étudiant Unef unions.

The unions suggest hanging placards and banners from balconies as well as joining in with social media campaigns.

The theme suggested is the “invisible workers in our society” – the often low-paid key workers such as nurses, street cleaners and supermarket staff who have been shown by the lockdown to be such essential parts of any society.

“It is first and foremost all health workers who have not counted their hours and their dedication,” but also employees, “often women, in commerce, food processing, paramedical, social and cleaning services, public sector workers, and more broadly those who work in the service of the population,” the unions said, adding that these people were often risking their lives to continue working during the lockdown.

The unions are calling for wage increases and raising the minimum wage.

Around one million people are expected to take to the streets nationwide, a police source told AFP, rallying against plans to boost the age of retirement from 62 to 64.

Some 11,000 police were mobilised across the country, with 4,000 deployed in Paris where several hundred extremist troublemakers were expected, according to the interior ministry.

France currently has the youngest age for becoming a pensioner in any major European economy.

On January 19, some 1.1 million voiced their opposition to the proposed shake-up — the largest protests since the last major round of pension reform in 2010.

Millions had to find alternative means of transport Tuesday, work from home or take time off to look after their school-age children, with workers in transport and education sectors among those staging walkouts.

“This is about more than pensions, it is about what kind of society we want,” 59-year-old university professor Martine Beugnet told AFP, saying she would take part in Tuesday’s protest.

In the southwestern city of Bordeaux, Cheikh Sadibou Tamamate, 36, arrived at the train station in the small hours of Tuesday, hoping to catch a morning train to Paris after the one he was booked on around 5:00 am (0400 GMT) never left.

“Unfortunately it was cancelled,” he said.

Sitting on a bench with an open laptop Guillaume Chaux, 32, said he discovered his train had been cancelled as he arrived at the station, but he still hoped to make it to London Tuesday.

“I’m looking at travel apps to see if I can get another train. Nobody has told me anything,” he said.

Air travel is to be less badly affected, with national carrier Air France saying it would cancel one in 10 short and medium-haul services, but long-distance flights would be unaffected.

Only minor disruptions were expected on international train services including the Eurostar.

Around half of all nursery and primary school teachers would be striking, the main teachers’ union Snuipp-FSU said.

France’s oil industry was mostly paralysed, with the hardleft CGT union at energy giant TotalEnergies reporting between 75 and 100 percent of workers on strike.

Sixty-one percent of French people support the protest movement, a new poll by the OpinionWay survey group showed on Monday — a rise of three percentage points from January 12.

The most controversial part of the overhaul is hiking the minimum retirement age.

But the changes are also to increase the number of years people have to make contributions before they can receive a full pension.

The 45-year-old centrist on Monday said the changes were “essential when we compare ourselves to the rest of Europe”, where people typically retire later.

He insists they are necessary to guarantee the future financing of the pension system, which is forecast to tip into deficit in the next few years.

But opponents point out that the system is currently balanced, quoting the head of the independent Pensions Advisory Council as saying: “Pension spending is not out of control, it’s relatively contained.”

The government has signalled there could be wiggle room on some of the suggested measures, but Prime Minister Elisabeth Borne has said raising the age of retirement was “non-negotiable”.

Parliament committees started examining the bill on Monday, where Macron and his allies also face an uphill battle.

Macron’s centrist allies, short of an absolute majority, will need votes from conservatives to push through the new legislation.