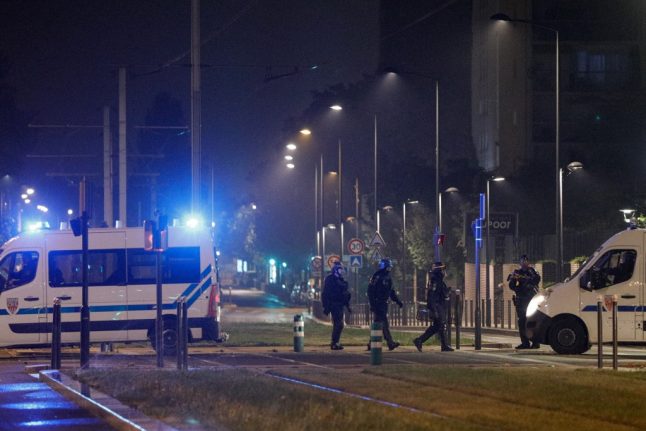 French CRS anti-riot police officers walk in a street in Villeneuve-la-Garenne, in the northern suburbs of Paris after clashes erupted this weekend. Photo: AFP

Residents burned trash and cars and shot fireworks at police, who responded with rubber bullets and tear gas in the suburbs of Villeneuve-la-Garenne and Aulnay-sous-Bois, witnesses and police said on Monday.

The tensions were ignited in the early hours of Saturday when a motorcyclist was injured during a police check in Villeneuve-la-Garenne, prompting about 50 angry bystanders to gather.

A police statement said the group targeted officers with “projectiles” in a near two-hour standoff.

The motorcyclist, 30, was hospitalised with a broken leg and had to undergo surgery after he had crashed into the open door of a police car.

Residents allege the door was opened deliberately so that the rider would smash into it.

The man will lodge a complaint against the officers, his family and a lawyer told AFP, while prosecutors have opened an investigation.

By Monday morning, calm had returned to Villeneuve-la-Garenne after a second night of riots marked by suburban fires and explosions, an AFP journalist observed.

The trouble had also spread to nearby Aulnay-sous-Bois, where police claimed they were “ambushed” by residents in a district of dense, high-rise social housing of mainly immigrant occupants who claim they are regularly the victims of harsh police treatment.

Police said they were targeted by residents using fireworks as projectiles. A van set on fire as tensions flared up between inhabitants and police. Photo: AFP

After the motorcyclist was injured on Saturday, rights group SOS Racisme issued a statement calling on authorities to shed full light on the incident, and urging police restraint “in this time of confinement and tensions”.

Earlier this month, prosecutors opened an investigation into the death in detention of a 33-year-old man arrested for allegedly violating the home confinement measures imposed by the government to curb the spread of the coronavirus.

Police said the man resisted arrest. According to his sister, he had suffered from schizophrenia.

Prime Minister Edouard Philippe said Sunday police had carried out 13.5 million checks since the lockdown started on March 17th, with people allowed outside only for essential purposes, and then with a self-certified letter explaining their reasons for leaving their home.

More than 800,000 people were written up for violations.