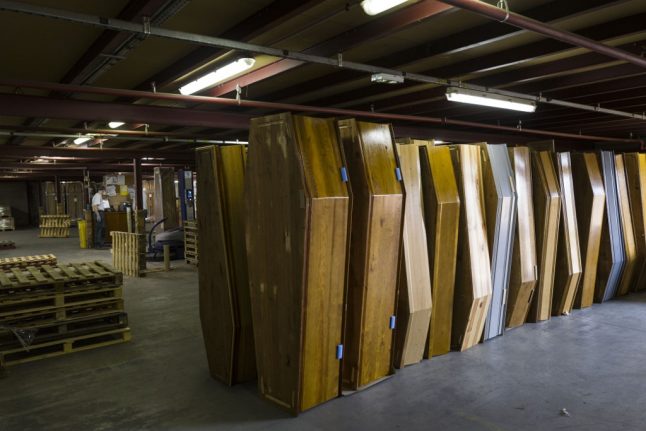 Photo: AFP
The problem is that we all seem to be playing this macabre game by different rules. It’s as if the football scores on a Saturday read Manchester United 2 Wasps 23.
Here is my attempt to unpick these figures, using not only the official daily Covid figures announced by governments but  the changes in national mortality rates (so far as they are known) since the crisis began in early March.
It’s clear that there are vast discrepancies in the way that European countries count and report Covid-19 deaths.
France is one of the honest ones but not so painfully honest – or perhaps over-officious – as Belgium.
If you take the official figures, Belgium has suffered by far the worst death toll of any country in the world – almost 5,000 deaths for 10,000,000 people, the equivalent of 30,000 deaths in France.
But Belgium counts not only deaths in hospitals (like Britain) plus care homes (like France), it includes any death where the virus is suspected to have played any part, however small.
France counts hospital and care home deaths which are “linked” to Covid – giving 19,718 deaths since March 1st, more than one third of them in Ehpads or care and nursing homes for the elderly.
READ ALSO What do we know about the people who have died from coronavirus in France? Deaths in care homes, which not all countries include in official statistics, make up around one third of coronavirus deaths in France. Photo: AFP
Statistics suggest that the worst afflicted country in Europe may end up being the United Kingdom, where deaths in care homes are not yet systematically announced (except in Scotland).
But I’m reluctant to point the finger of blame at any government at this stage. It is clear that many factors influenced the spread of this nasty disease, not just official incompetence.
A startling fact which emerges from a deeper look at the figures is the enormous regional disparity in the spread and the impact of the disease in France. Something similar is true in Britain.
Apart from the daily death toll given each evening by the French chief medical officer, Jérome Salomon, weekly numbers on “excess mortality” are published each Friday by the French statistics agency, INSEE.
They show, département by département, all deaths reported from all causes since March 1st, with a 10-day delay. They give a comparison with the same figures from 2018 (a horrible year for ‘flu deaths) and 2019 (a “good” ‘flu year).
Taking a rough average of deaths in the last two years, they give a rough-and-ready picture of the true “excess mortality”, or increased number of deaths, caused by Covid-19 in France in 2020.
The figures released last Friday end on April 6th and show a “surplus” of around 9,000 extra deaths – roughly in line with the government’s Covid figures at that point (8,911). Graphic INSEE.
This suggests that the official French virus death toll (now approaching 20,000) is broadly accurate.
What is startling, however, is how concentrated the deaths are regionally.
Swathes of France, including 30 départements in the centre and south west and parts of the Alps, had a lower death rate up to April 6th than in the average of 2018 and 2019.
READ ALSO MAP Where in France has the fewest coronavirus cases?
In a further 20 or so départements, including most of Normandy and Brittany, the increase in mortality was minimal. In other words, Covid-19 has scarcely been noticed in something like half of France (up to April 6th).
In the country as a whole, the “excess mortality” was 13 percent higher than the average of 2018 and 2019. In the greater Paris area, the Îl-de-France, the death rate was up by 72 percent.
In the Grand Est region of Alsace, Lorraine and Champagne it was 52 percent higher. In the Hauts de France (Lille, Calais etc) and Burgundy-Franche Comté it was 20 percent higher.
Taken département by département, the differences are even more striking.
The worst affected single département is Haut-Rhin (southern Alsace around Mulhouse) where the death rate was 143 percent higher up to April 6th.
In the second worst afflicted, Seine-Saint Denis, just north east of Paris, the toll was 115 percent up – in other words more than double the average.
By comparison, in the south west, Dordogne had fewer deaths than an average of the two previous years – 90 fewer to be precise. Gironde had 37 fewer deaths. Lot, 19 fewer. Tarn et Garonne, 37 fewer. Some patients in the worst affected areas have been taken by specially adapted trains to regions that have fewer cases. Photo: AFP
All of that could still change – or may already have changed by the time we see the next set of figures up to April 13th. But that seems unlikely.
The March 17th lockdown seems to have checked the spread of the virus.
If there are such wide discrepancies within one country, do criticisms of national differences make any sense?
It is not a if Normandy or Nouvelle Aquitaine reacted to the epidemic better than Alsace.
As President Emmanuel Macron said last week, it’s partly a question of luck – and geography. Alsace was horribly infected by one large religious gathering in Mulhouse.
Greater Paris is a densely populated region surrounding one of the most visited cities in the world.
All that should be taken into account (but isn’t) when making comparisons between countries.
Germany has clearly performed well. There have been 4,543 deaths up to April 19th in a population of 83,000,000. But Germany is much less visited by tourists than either France or Britain.
At least Germany counts and reports all its Covid-19 deaths, although not perhaps as conscientiously as Belgium.
Other “good” performances in the European Death Leagues are far from trustworthy.
By April 15th, the Netherlands had reported 3,100 Covid-19 deaths for a population of around 15,000,000.
But the Dutch national institute for public health includes only patients who tested positive for the disease and died in hospital.
On April 5th, according to The Economist, the Dutch statistic bureau showed 4,000 “excess deaths” for the previous four weeks.
The government’s Covid death toll at that point was 1,700. This implies that the actual Dutch losses from the virus could be at least double. Doubts also exist, according to The Economist, about the completeness of the high Italian and Spanish figures.
Britain’s figures remain opaque and disputed. The last date for which deaths from all causes is available is April 3rd.
There had been 7,000 “excess” deaths in the previous 4 weeks, compared to the 4,300 initially announced in the government’s daily press conferences. Scotland does count care home deaths. England still does not
The excess British mortality up to April 3rd suggests that another 40 percent should be added to the official Covid toll in the UK – taking it from 16,000 to around 22,000. French Prime Minister Edouard Philippe presents graphics showing intensive care rates in France, along with modelling for what those rates could have looked like without the lockdown.
All of the figures are grim. Without wanting to minimise the severity of Covid-19 or the need for lockdowns – I would like to add a couple of other numbers.
In an “average” year, France loses 10,000 people to influenza, 80 percent of them very elderly.
In the winter of 1969-70 – the last really bad ‘flu year – France lost 31,000 people. The epidemic was scarcely mentioned in the media. No special preventative measures were taken.
France is now heading, I calculate, for a Covid death toll of around 40,000 at most (far less than the worst case predictions).
But how many deaths would there have been from Covid-19 had we not all been placed under house arrest for nearly two months?
READ ALSO 'Living with the virus' – the plan for life in France after lockdown