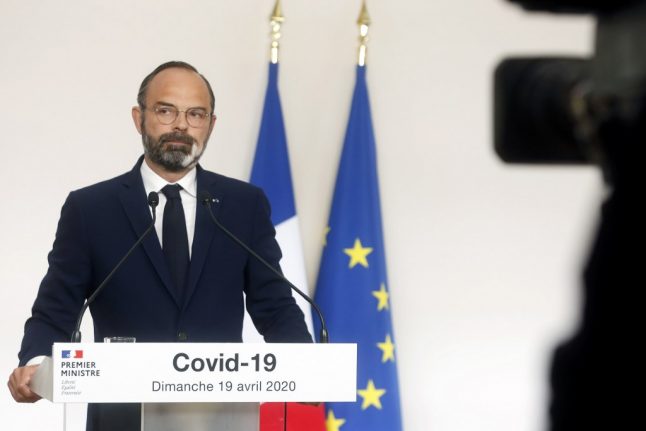 Prime Minister Edouard Philippe, addressing the nation live on Sunday night said: “The circulation of the virus is weak and contained.

“I am saying this with a lot of caution; the virus is under control.”

But the Prime Minister also warned that there was a long road ahead, saying “life will not go back to normal after May 11th”.

President Emmanuel Macron has already announced that France will begin to lift its strict lockdown conditions from May 11th – but the loosening of the restrictions will be slow and gradual.

From May 11th schools and businesses will begin to reopen but bars, restaurants and cafés will not reopen until at least early summer while public gatherings will be be allowed until – at the earliest – mid July.

Describing the epidemic as a “crisis is of a magnitude that we have never experienced” Philippe said the next stage would be gradually changing lives to co-exist with the virus.

He said: “Our lives from May 11th won’t be exactly what we knew before the lockdown.

“We will fight this by changing our habits. This will be our next challenge, and we will make it.

“The goal of the lockdown was to decrease the number of hospitalisations and people requiring intensive care.

“To achieve that, it was important that the French respect the rules. In general, people have done that.”

“Another goal was to limit the virus to certain regions.

“That's what we have managed to do.

“This shows the civility of the French and the capacity to adapt to an extreme situation.”

The regions of Grand Est and the greater Paris Île-de-France region have been by far the worst hit by the virus, but Philippe presented scientific modelling showing that, without a lockdown, the majority of France could have experienced the same level of infections.

READ ALSO What do we know about the people who have died from coronavirus in France? The fact that the virus was concentrated in certain areas has meant that patients could be moved out to other areas with fewer cases, and avoid intensive care facilities becoming overwhelmed.

The latest figures showed that 644 intensive care patients have been transferred – by specially adapted trains and by air – to other parts of France and over the border the Switzerland, Austria, Germany and Luxembourg.

France's death toll is now listed at 19,718 – 12,069 deaths in hospital and 7,649 in nursing homes, announced the Director General of Health Jérôme Salomon.

The deaths toll on Sunday for the past 24 hours in hospitals was listed at 395. For the 11th day in a row the number of patients in intensive care fell – by 89 people in the last 24 hours – and the overall number of hospital patients also fell by 29.

Visiting to the country's Ehpad nursing homes – which has been completely forbidden for more than a month – will be allowed in limited circumstances from Monday, health minister Olivier Véran added. Government graphic showing intensive care occupation – starting from 5,000 beds at the start of the crisis, rising to 10,500 beds with an occupation level of 7,000 people.

Philippe also touched on the economic shock of the lockdown, with France projected to be facing its worst recession since 1945.

He warned: “The economic crisis is just starting. It will be brutal.

“We have never seen such a massive, general, brutal stoppage of the world economy.”

Latest figures show that economic activity has fallen by 36 percent since the lockdown began, with massive falls of 43 percent in industry, 88 percent in construction and 90 percent in the hospitality sector.

Philippe said that the government would be presenting its detailed planed for exiting lockdown within the next 15 days. There are several things that remain unclear – including how long the over 70s and others in vulnerable groups will have to stay confined and when international travel will be permitted again.

But he stressed that the next stage will be 'living with the virus' and adapting behaviour over the course of many months until a vaccine is found.