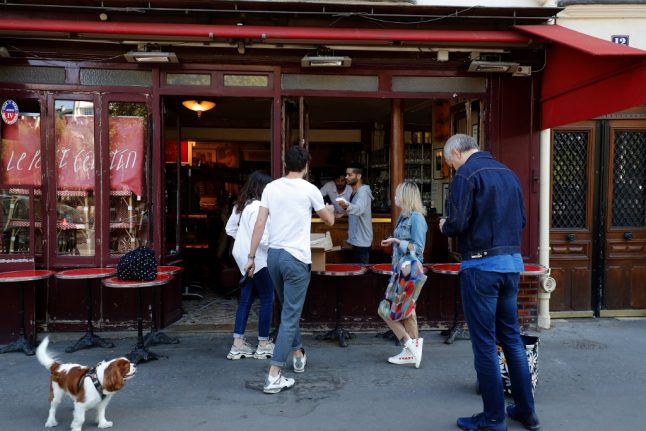 A man deliver food to costumers from a cafe in Paris, on April 18, 2020 during the 33rd day of a lockdown in France aimed at curbing the spread of the COVID-19 pandemic, caused by the novel coronaviru

The new deaths — 364 in hospitals and 278 in nursing homes — brought the total toll in the country from the epidemic to 19,323, the French health ministry said in a statement.

However in a continuation of a trend seen over the last days the number of coronavirus patients in hospital fell by 551 to 30,639. The numbers in intensive care meanwhile fell by 194 to 5,833.

“The fall in the demand for equipment and human resources in intensive care is continuing, but it is still at an exceptional level, far higher than the usual level in France,” the statement said.

On Friday France's Director General of Health Jérôme Salomon said: “It's a slow but steady drop.”

“The first wave was very much alleviated by all the French people, by respecting physical and social distancing measures, by respecting confinement and 'barrier measures',” said Salomon.

“We have strongly broken the epidemic which at the beginning was very contagious, with a virus that was being transmitted to a very large number of people,” said Salomon.

But the health chief warned: “After the confinement the French will also have the responsibility to curb the risk of the virus. It will still be present in Europe.”

France has been in lockdown since March 17 in a bid to slow the spread of the epidemic. But President Emmanuel Macron announced this week that the lockdown could begin to be eased from May 11.

Schools could gradually reopen then, he said — but cafes, cinemas and cultural venues would remain closed, and there could be no summer festivals until mid-July at the earliest.

Prime Minister Edouard Philippe and Health Minister Olivier Veran are due on Sunday to give a news conference on how France is dealing with the virus.

They are expected to be pressed on how the lockdown can be eased from May 11.