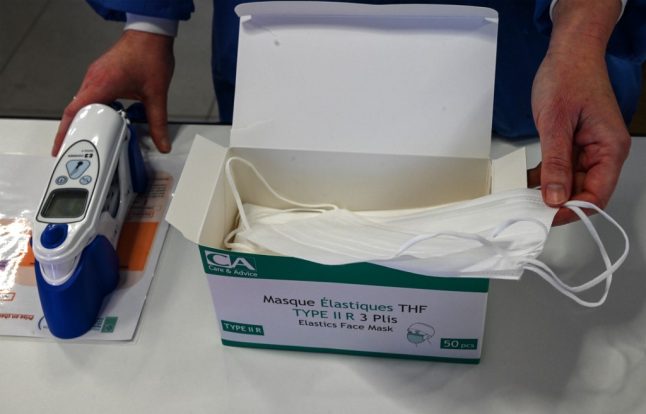 A nurse equipped with a thermometer and face masks prepares to welcome visitors at the Saint Roch hospital, which houses a COVID-19 testing centre, in Montpellier, southern France: AFP

Sceptical of the French government's response to the epidemic, the Chinese embassy, business leaders and ex-pat associations have handed out so-called “COVID kits”, masks and other protective equipment to their compatriots.

But this landed some in trouble with the law. Among the masks given out were the highly sought-after FFP2 type, which in times of critical supply shortages have been reserved for medical personnel on the frontlines of France's coronavirus battle.

Early in the outbreak, France had requisitioned all face mask stocks and production for distribution to doctors, nurses and caregivers.

Yet on April 5, police in Paris detained two representatives of Chinese associations for possession of some 15,000 masks.

Two days later, three students were arrested while handing out Chinese embassy-sponsored “COVID kits” in the Paris suburbs, an operation which caused people to amass in contravention of France's strict social distancing regulations to stem the virus spread.

FFP2 masks were included in some of the kits, along with protective gloves, disinfectant wipes and Chinese traditional medicine.

The Chinese embassy in Paris insisted in a statement that there was nothing illegal. It was doing “its best… to defend the rights and legitimate interests of Chinese compatriots in France.”

The health crisis has strained ties between Paris and Beijing. France this week summoned the Chinese ambassador to protest a string of controversial comments by Beijing's embassy in Paris on France's handling of the coronavirus.

And French President Emmanuel Macron told the Financial Times that things “happened that we don't know about” in the response to the virus by China, where the pandemic originated.

The “COVID kit” initiative came in response to a letter dated March 31, in the form of an urgent appeal signed by about 20 bodies representing France-based Chinese people, whom they judged to be “in danger”.

Faced with “the inability (of the French authorities) to take appropriate protective measures”, said the authors of the letter, penned in Mandarin, they were launching an appeal for “certain protective products and medical materials”.

Two days after it was sent out, the Chinese embassy in Paris launched a distribution programme of “COVID kits”, using students who organise deliveries with the help of popular Chinese messaging app WeChat.

There are 125,000 Chinese nationals living in France on residency permits, a small proportion of all foreigners residing in the country.

If ex-pats granted French nationality are included, the number could be as high as 700,000, according to local groups.

Many are keen to go home to China, which they believe is in control of the epidemic five months after the coronavirus outbreak started there last December.

But “Beijing wants to avoid the returns for fear of having imported cases,” said Simeng Wang, a researcher at France's CNRS institute.

“So the government decided to help the Chinese abroad, to calm the situation. This can be called Chinese health diplomacy,” she said. Pedestrians wear face masks in the main street of Sceaux, south of Paris on April 8, 2020: AFP

Besides official aid, there has been massive private mobilisation, including the supply of millions of masks via “non-official channels,” said Tamara Lui, president of the Chinese Association of France.

She said the community felt itself “marginalised”, partly because they insisted on wearing face masks even as the French government refuted their efficacy as a means of virus control for the general public.

“Teleconsultations with doctors based in China has exploded,” she added. Chinese national Jimmy Gov's father, was among those arrested on April 5.

“We wanted to help the nationals who do not speak (French) well. The community is shocked. We were there to help and we received a slap on the wrist,” said Gov, whose father is to appear in court in September.

The community stresses it is extending a helping hand beyond its own, tight-knit group.

In the 13th district of Paris, where many Chinese ex-pats live, associations and business leaders are “using their networks to distribute masks to health personnel,” said Laetitia Chhiv, president of the Association of Chinese Youth in France.

Just on Thursday, 250,000 masks were delivered to the municipal council in the district for redistribution.

“The entire community is mobilised on this issue,” said Adeline Dai, who handles logistics for several Chinese associations.