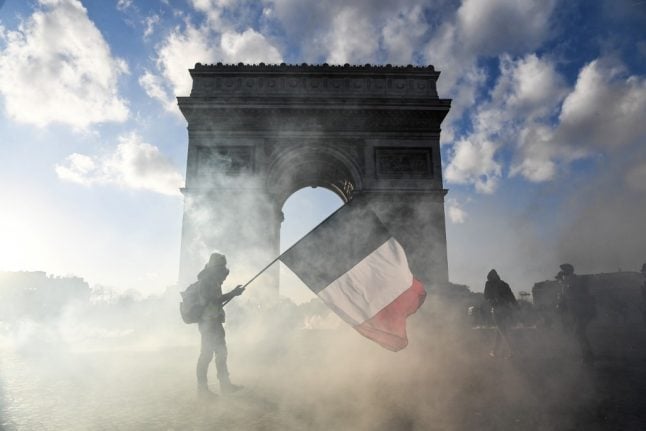 For weeks now France has been subject to stringent rules regulating all outdoor activity.

When leaving the home – even if it is simply to pop to the boulangerie next door – everyone must fill out and sign a form stating their errand and submit to regular police checks.

READ ALSO This is how France's lockdown will end

And for a month now, the majority of French people have done as they were told.

Even if the police have handed out roughly half a million fines, there have been no riots, no protests, no social street stir.

“They said we were an undisciplined people and yet here we are respecting some of the most rigorous rules ever imposed in peace time,” French president Emmanuel Macron said on Monday – himself sounding slightly surprised over his people's docility – before he extended the lockdown until May 11th.

France’s lockdown entered into effect on Tuesday, March 17th, after a weekend when people all over the country seemed largely to defy the government’s request for them to stay home.

On the Saturday, Prime Minister Edouard Philippe went live on television and asked those who were drinking wine in bars and having dinner in restaurants to go home.

Few did. The next day, a sunny Sunday, the French flocked to the parks.

French media reported that a close advisor to the president had said “the spirit of enjoyment has overpowered the spirit of sacrifice.”

It was a quote from Marshal Philippe Pétain, head of state under the Nazi collaborating Vichy regime established during World War II, who blamed the 1940 military defeat on the population’s poor work ethic and “esprit de jouissance” (spirit of enjoyment).

While the statement was controversial for many reasons, it laid bare the lack of confidence by some in the French population's ability to respect strict rules of social distancing to limit the spread of the coronavirus contagion.

So when the government announced the nationwide lockdown, who knew if the French would obey or revolt?

“There is an idea that the French are very gregarious and do not take orders coming from above,” said Divina Frau-Meigs, a professor at the Sorbonne Nouvelle University in Paris.

“But I think that’s a cliché.”

Frau-Meigs is a specialist in risk behaviour and communication. She said the lockdown had been implemented at the right time. Had the government introduced a lockdown in the beginning of the epidemic, it could have been seen as they were clamping down on democracy.

“It had to be incremental with learning a lesson,” Frau-Meigs told The Local.

“The French are very rational and pragmatic people. If you give them clear orders that seem justified, they follow them.”

By the time the lockdown order was given, most people had understood the gravity of the virus.

Hospitals were already struggling to cope under the growing pressure of patients. Most people knew someone who knew someone who had the virus. The French, like people all over the world, were getting scared. When Macron introduced the lockdown, there was one sentence that stuck with the listeners. “We are at war,” the president said, over and over again.

“Framing the lockdown as a 'war' was important in mobilising the French and generating a feeling that we needed to work together,” said Bruno Cautres, a political analyst at the French Cevipof Institute.

“It became a question of fighting for the future of the French nation, with the white-coated soldiers [healthcare workers] on the front line,” he said.

Cautres remembered how, early on, Health Minister Olivier Véran participated in TV interviews, pointing at graphics that showed how the epidemic curve – were it not halted – could crush the country’s health system.

Despite their modest salaries and long hours, hospital workers have a high social standing in France – a country that prides itself on having one of the best healthcare systems in the world.

“The government pushed a narrative that the lockdown would save the hospitals from crumbling under pressure,” Cautres said. “I am not surprised that this works well in France.” Every evening at 8pm, the French clap their health workers from their windows. Around the same time, the country's health chief Jérôme Salomon presents the latest coronavirus hospitalisations, deaths, intensive care rates and other key numbers.

Few knew Salomon before the coronavirus, but these days he is a regular feature in French living rooms. Many people associate him with a sort of sombre and cautious reassurance.

If they send the prime minister instead, that can be a sign that the numbers are particularly bad.

Frau-Meigs said France harnesses “a belief in the public service,” both in the public health system and police, that was “important to explain why people are not in the streets.”

Social media played a pivotal role in creating a feeling of community, Frau-Meigs said. It became a platform where people could observe the fruits of their work to bring down the epidemic curve together.

“It's a very encouraging feeling of instant reward, which is not easy to achieve in confinement,” she said.

Crucially, the aim seemed within reach.

“It’s not about eradicating the disease, but limiting the curve,” she said.

Among foreigners, France is infamous for its endless administrative rules and bureaucratic gridlocks.

A specialist in public opinion, Cautres pointed to the lockdown permission form as an example of “the French paradox” because it gave room for people to adapt the rules themselves.

“We are a country that at the same time overvalues great causes and values rules, but we also like to adapt these rules,” Cautres said.

Ticking several boxes at the same time, even when you were only running one errand, only changing the date instead of filling out a whole new form – this was a form of French paradox in itself, Cautres said.

“Providing some leeway within the set of rules is very important to the French,” he said.

The French government had been sending “clear and simple” messages from the beginning, with “few contradictions,” Frau-Meigs said.

However there were several points on which the government had shifted their stance since the beginning of the epidemic.

First people were told that wearing masks was useless. Criticism surged after French media reported how the government had failed to jump on a string of opportunities to get mask deliveries, while the country had all but run out.

Even hospital workers didn’t have enough masks, and disgruntled police had to hand over masks to the hospitals. Then, the official line flipped, with the government now encouraging anyone who wishes to wear a mask to do so. Macron and his government has been criticised for shifting their position on masks. Photo: AFP

Critics have also slammed the government for enforcing a lockdown while maintaining local elections (several local organisers later tested positive for the virus).

On the other hand, cancelling the elections could have been seen as an attempt by the ruling party – which was trailing in the polls and was recently hit by the Griveaux-gate sex scandal in Paris – to use the health crisis for political gain.

Cautres said that there was not necessarily a contradiction between opposing the government’s decisions and following the general health advice.

“These are two intrinsically different things,” he said. “I don’t see a paradox in respecting a health plan while criticising the government.”

France’s compliance perhaps did not so much reflect a general feeling of acquiescence with the government’s strategy as an acceptance that – in order to save the hospitals, the elderly and the vulnerable – political discord needed to stay online, at least for the time being.

“I don’t think French people are living this as a contradiction,” Cautres said.