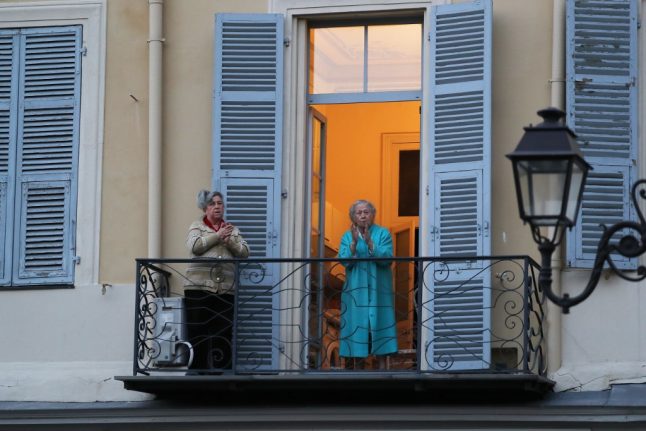 Elderly and vulnerable people could be facing lockdown for some months yet. Photo: AFP

France's nationwide lockdown has been extended until May 11th, but after that there will be a slow and gradual loosening of restrictions.

As schools and businesses reopen followed, at a later date, by bars and restaurants, many people are looking forward to resuming normal life.

But there's an exception to this – the elderly and vulnerable, as Macron said in his speech: “We will ask the most vulnerable people, the elderly, the severely disabled, the chronically ill, to remain confined even after May 11th, at least initially.”

So what does this mean for people in those categories?

Macron didn't actually mention an age in his speech, but generally measures aimed at les personnes âgées have meant anyone over 70.

People with a severe disability or a serious chronic health condition such heart disease, diabetes or cancer are also included in the most vulnerable category.

Although obesity is also recognised as a risk factor in France, the general advice at present seems to be that only those who are both obese and have an existing medical condition should be considered vulnerable.

In France, 78 percent of coronavirus deaths have been people aged over 70 and 60 percent of patients in intensive care are 70 or older, so the illness has a clear bias towards the over 70s.

France's elderly and vulnerable population is estimated to total around 18 million people.

It's not clear at this stage. In his speech Macron said “we will ask” rather than “we will order” so it's possible that extra restrictions could be voluntary.

On Friday April 17th the Elysée made it clear in a statement to French media that Macron did not want to discriminate against  elderly people and would call on the “individual responsibility” each person.

Macron apparently asked the Elysée to send out the statement as the debate began to rage in France over whether it would be legal or indeed beneficial to confine vulnerable and elderly people to their homes for even longer.

There was also a fierce debate developing over what the age limit would be.

Before the strict lockdown began on March 17th, the over 70s and the vulnerable had already been advised to stay at home, although there were no checks and no attestations at that stage.

The lockdown in general will be a gradual loosening of restrictions, so even after May 11th there will still be plenty of controls in place for everyone.

The broad outline of the plan is to open schools and businesses through May, bars, restaurants and cafés in the early summer and then restart public events from mid July – although this all depends on the situation in hospitals and whether it worsens after the first loosening of restrictions.

Ministers are drawing up more detailed plans which are expected to be presented over the next fortnight.

How long will the elderly be asked to remain at home?

Again, there is no definitive answer to this – the question that everyone wants answering.

Jean-François Delfraissy, chairman of the scientific council on the coronavirus that advises the government, spoke before the French Senate on Wednesday.
Delfraissy, who at 71 falls into a vulnerable category himself, said: “We will have at the exit of the lockdown 18 million people who are at risk of being infected and of developing a severe form of coronavirus.
For these 18 million people “we will continue the lockdown. Under what conditions, for how long, I don't know.
“While waiting perhaps for a preventive drug,” he added.
And it's not only France that is thinking along these lines.
European Commission president Ursula von der Leyen, writing in the German daily paper Bild, called for there to be some restrictions on contacts with elderly people until the end of the year.