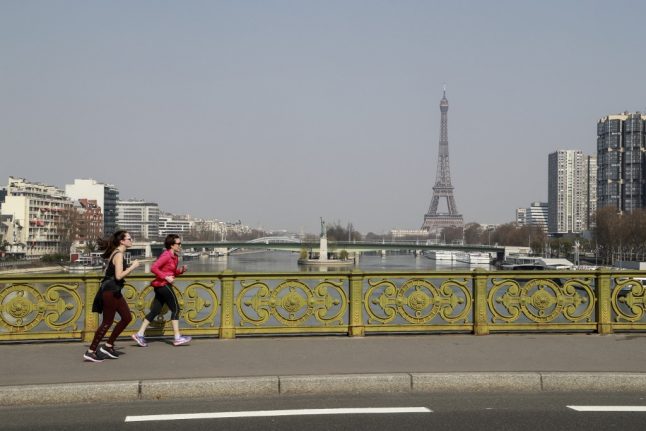 Parisians can go for a run during the nationwide coronavirus lockdown, but not between 10am and 7pm. Photo: AFP

Joggers in most of the Ile-de-France region may now go for a run whenever they like during the day after most départements decided against reintroducing the recent ban on jogging between 10am and 7pm.

Only Paris and seven communes in the southeastern département of Val-de-Marne, surrounding the forest Bois de Vincennes, decided to extend the ban that has made going for a run between 10am and 7pm a punishable offence.

Rule breakers in these areas risk a €135 fine.

Paris would review the rules in a week, confirmed the capital's Deputy Mayor Emmanuel Grégoire to France Info.

“We will evaluate (.. if the ban) should be moved, tightened, loosened or maintained,” Grégoire said.

The ban does not cover those walking the dog.

Limit number of people on the street

Paris introduced the daytime jogging ban on April 8th in a bid to limit the number of people out on the streets at the same time.

The daytime ban came on top on the already strict lockdown rules that has confined people across the entire French territory ton their home since midday March 17th.

Jogging and other outdoor physical activities were not banned completely, but have been allowed in a restricted space of 1km from the home and for one hour maximum every day.

Cycling for exercise is banned altogether – although cycling to work or the supermarket is still allowed – and all group sports such as football are banned.

Paris has also banned access to certain areas such as the walkways along the Seine and the Bois de Vincennes and Bois de Boulogne.