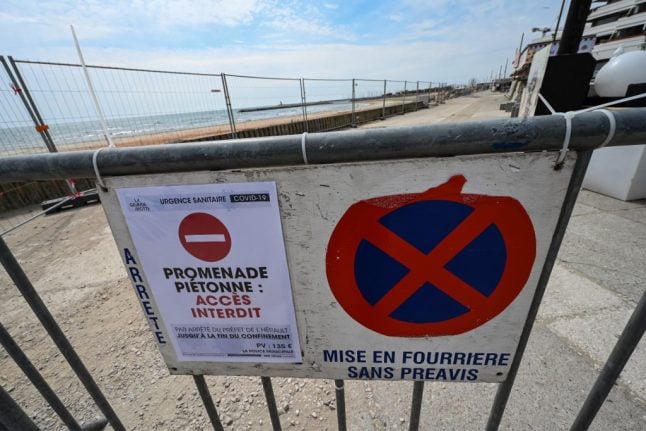 Things will - gradually - start to ease from May 11th. Photo: AFP

In his live TV address to the nation on Easter Monday, which attracted a record-breaking 36.7 million viewers, Macron extended France's strict lockdown until May 11th.

But he also laid out the framework of a gradual return to normal after that date, with businesses and schools reopening and events resuming.

May 11th would be “the beginning of a new stage,” Macron said.

However he stressed that this would be a gradual process, and dependant on the health situation – and on people continuing to obey the lockdown rules. Emmanuel Macron attracted the biggest TV audience ever for his Monday night speech (although it's not like people could go to the pub instead of watching). Photo: AFP

Things will broadly stay the same between now and May 11th, with only essential trips outside the home permitted and everyone needing an “attestation” to show police every time they leave the house.

READ ALSO Explained: These are the rules of lockdown in France

Then from May 11th until about mid July things will start to gradually reopen.

Interior Minister Christophe Castaner said on Tuesday morning that more detailed plans will be released in the next 15 days, but in the meantime, here is what we do and don't know.

Will I still need the permission form after May 11th?

Macron didn't mention it in his speech but while May 11th might start the beginning of the easing of restrictions it might not mean the end for the “attestation”.

Both he and his ministers have stressed that this date is not an end, but the beginning of a gradual process of loosening some restrictions. Castaner said this morning that May 11th is an “objective” that could still be moved if the health situation gets worse.

Which businesses will go back to work first?

Italy began the process of loosening its lockdown this week by allowing specified businesses – including baby clothes shops and stationers – to reopen alongside the essential businesses like food shops and pharmacies.

Macron did not specifically mention any business types, but it seems that the return to work will be a lot more general and widespread in France, with Macron saying that it was a priority to “relaunch our industry, businesses and services”.

The only type of businesses mentioned were those that would be excluded from the May 11th reopening.

Those included bars, cafés, restaurants, cinemas, museums and tourist sites – anywhere that attracts big groups of people essentially. It's likely that more businesses could be added to that list in the coming days.

France faces another 4 weeks in strict lockdown as part of the fight against the coronavirus epidemic. How do you feel about a gradual 'reopening' on May 11th? Please share your views in replies to this tweet.

The president did say the situation would be reviewed every week from mid-May.

Which schools will go back first?

It is certainly not the case that all schools will reopen on May 11th – Macron stressed that the reopening would be gradual and progressive – but beyond that we don't have much detail.

Education minister Jean-Michel Blanquer said on Tuesday that “small groups” would be key, so even when a school reopens, it's possible not all pupils would go back at once.

Certain age groups may return at different times while both the education minister and the president have suggested the priority is to get children in disadvantaged areas back into the classroom first, because the lockdown was harming them the most.

More details will be released over the next two weeks, but he said that lycées professionnels (technical colleges) may well be the first ones to resume classes.

Macron had already stated that universities will not resume in-person classes (many are currently teaching seminars via Zoom) until at least early summer, and all schools must have protection for teachers and pupils before they can contemplate reopening.

Education minister Blanquer added that there is a “strong possibility” that masks will be compulsory in schools.

When will public transport be increased?

Public transport is still running in France, but at a very reduced level as almost all travel is banned. Trains are running about 10 percent of their normal services while in Paris the Metro, tram and bus system is also running at a very reduced rate.

If a significant number of people are to return to work, services will need to be increased, but there has been no detail given on this.

The services, especially in Paris, were reduced gradually over the first two weeks of the lockdown, so it seems likely that they will be phased back up in the same way.

At present travel around France is not possible except for essential reasons, and there was no mention of loosening this restriction.

What about international travel?

There was very little on travel in Macron's speech, with him saying only that the EU-wide ban on travel from outside the EU (excluding the UK) will continue after May 11th and “until further notice”.

But travel into France from within Europe is currently heavily restricted – everyone needs an international travel certificate and non French citizens can only enter the country if they fit a narrow set of criteria for essential travel.

There was no mention of any change to this and it may be that France is waiting to see how the situation develops in other countries before loosening restrictions.

France was reportedly very concerned about the situation in the UK before the lockdown began, and Prime Minister Edouard Philippe said France “would find it difficult” to accept to accept people from the UK if no restrictions were put in place.

Lifting of restrictions may therefore depend on whether the UK manages to get its situation under control. It is currently recording the highest level of hospital deaths in Europe.

Where can we get masks?

Macron said that masks will be central to the strategy for the loosening of restrictions, along with testing and tracking apps.

He said by May 11th the public will be able to get their hands on a face mask.

However at present it is very difficult to get hold of a mask.

Health Minister Oliver Véran on Tuesday clarified that the masks distributed to the general population will be washable cloth masks – therefore different to the masks used by healthcare professionals.

He was not clear on the distribution method, but Macron mentioned working with local mayors so it seems likely that they will be distributed at a local authority level.

Macron did not go this far, but he said that the wearing of a mask “will become the norm”.

How will the testing work?

Macron said that France's testing strategy will be expanded and by May 11th there will be the capacity to test everyone with symptoms. However he said that mass testing of the whole population “made no sense”.

How exactly the testing programme will be administered we don't know.

And if someone tests positive?

Macron simply said that anyone who tests positive can be “quarantined” but he did not say whether this would be in their home with their family or elsewhere, for example specially transformed hotels as some countries have set up for those who test positive.

“People with the virus will be able to be quarantined, taken care of and followed by a doctor,” said Macron.

Who counts as a vulnerable person?

People who fall into high risk groups will be asked to self isolate past May 11th, the president said.

He did not specify exactly who this includes, but health authorities have previously stated that the people most vulnerable to the virus are the over 70s, severely disabled people and people with serious chronic health conditions.

Macron didn't suggest for how long elderly and vulnerable people will be asked to self-isolate for, but EU leaders have suggested that vulnerable groups will have to limit contact with others until a vaccine becomes available.

Will there be regional variations?

In early discussions of lifting lockdown there was much discussion of doing this on a regional level, however Macron did not mention this as part of the strategy he laid out.

Macron simply said the “the rules could be adapted based on our results”.

Paris and Grand Est remain the worst affected regions, but with the country's economy heavily concentrated on the capital there will be pressure to reopen businesses there as soon as possible.

With May 11th still a month away, ministers will be hoping that the situation in all hospitals will have eased by then.

When will France's postponed municipal elections be held?

We don't know. France managed to get to the polls for the first round of voting in municipal elections – where local officials and mayors are elected – but the second round fell victim to the lockdown. This will have to be rescheduled, but there has been no date given for this.

When will sports resume?

We don't know for sure, but France's football league has produced two provisional calendars for the restarting of professional games, with June 17th touted as the most likely date for the resumption of matches in League 1.

Although these will be played behind closed doors until at least mid July – the earliest date given for the resumption of large gatherings.

Do you have questions on the lockdown? Email them to [email protected] and we will do our best to answer them.

France’s Ministry of Energy said in a statement on Sunday that the coal-fired power plant in Saint-Avold, Moselle, may be put into use this winter “as a precautionary measure, given the Ukrainian situation” and tensions on the energy market.

Though the plant was closed on March 31st, the decision to potentially restart it does not come as a total surprise. The government had not ruled out the possibility of re-opening the plant as a way of securing the country’s supply of electricity in light of the war in Ukraine and setbacks in the nuclear sector.

The ministry added that should the plant be reopened, electricity produced by coal would remain below 1 percent of that used across France, and that no Russian coal would be used.

The statement comes as leaders from France’s top three energy providers issued a joint statement urging the public to reduce their energy consumption this summer in order to ensure adequate stocks for the winter.

As of late May nearly half of France’s nuclear reactors were offline, while international demand in the oil market has increased. However, French government officials have said there is “no risk of shortage in the short term,” though experts warn of potential “spot shortages,” as in many cases it is not possible to substitute one type of oil for another.

Other European countries, like Germany, have already decided to reopen their coal-fired plants in order to combat possible energy shortages this winter.