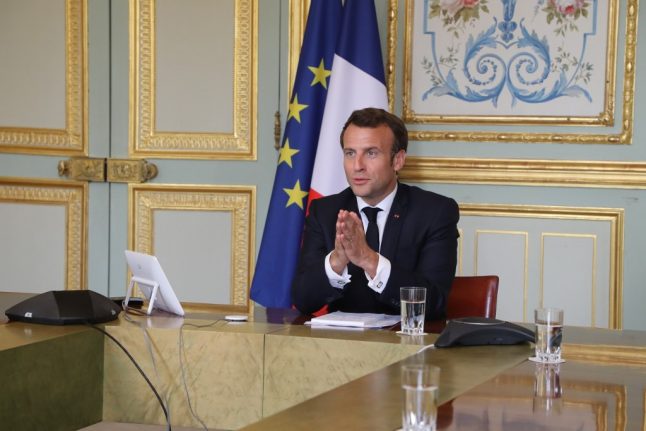 This was the third time President Emmanuel Macron held a live speech from the Elysée Palace since the beginning of the coronavirus epidemic in France. Photo: AFP

This article is completely free for everyone. The Local's future relies on readers signing up as members. Please support our website by considering joining. Scroll to the bottom for more information.

“The strict confinement must continue until Monday, May 11th,” the French president said in a live televised speech to the nation on Monday evening.
But he also warned that easing the lockdown then “would only be possible if we continue to be good citizens, responsible and respect the rules, and if the spread of the virus has indeed continued to slow,” he said.
“We are living in a difficult moment, but thanks to our joint effort, we are progressing,” said Macron adding that the epidemic was “beginning to steady” but wasn't yet under control.

France has been subject to a strict nationwide lockdown since midday March 17th.

Macron said the weeks of severe limitation of movement had been crucial in limiting the spread of the coronavirus and needed to be continued to prevent a resurgence of the disease.

“We need to continue our efforts to limit the spread of the virus and especially follow the rules,” he said.

For the first time, the government gave details on how they were planning to exit the current lockdown, which was entering its fifth consecutive week on Tuesday.

May 11th would be “a new step” when schools and creches would be gradually opened, the president said.

Universities would however not resume their classes “before the summer.”

Bars and restaurants would “remain closed” for a longer period and no major event would take place “before mid July.”

France's borders with non-European countries would remain closed for the time being.

Macron said that, starting May 11th, “as many people as possible” should “go back to work to relaunch our industry, our businesses and services.”

'France was not prepared'

He admitted that there had been shortcomings “as in all the countries of the world” and that France had not been sufficiently prepared.

“We lacked gowns, gloves, gel and we were not able to hand out as many masks as we would have liked,” he said.

Tests, masks and an app

Before the country began unwinding the lockdown, France would have developed means to protect the population from the virus, the president said.

Tests, masks and new technology were mentioned as three important factors to ensure that the easing of restrictions could be safely executed.

“Starting May 11th we will be able to test everyone who has symptoms,” Macron said, adding that France by then also would have increased its stocks of protective masks.

“The state should ensure that everyone has access to a mask (by May 11th),” the president said, adding that wearing a face mask could become “systématique” (routinely worn by everyone). But he didn't say they would be obligatory as some mayors around France have decided.

France would also have launched novel technological means to track the virus, notably an application that would allow for users to check if they had been in contact with someone that had tested positive for the virus.

Using the app would be voluntary and user's anonymity would be guaranteed, the government has said.

“A very small minority of the French have been exposed to the virus, we are very far from what we call a collective immunity,” the president said.

He indicated that a vaccine would be the only solution for ending the pandemic, adding there was no evidence of so-called herd immunity among people in France for now.

Macron said he was “aware of the sacrifices” the French were making by staying at home and promised to reinforce measures taken to protect the country's workers.

The government would enter discussions with social partners in order to establish rules that would protect the workers that went back to work.

France would also “extend and reinforce” the economic and social measures in place to help employees and businesses. The “hardest hit sectors” would be able to ask to annul their expenses and students and households in a particularly precarious situation would be able to ask for financial help.

This was the fourth time Macron addressed the nation on live TV since the beginning of the coronavirus epidemic and the third televised speech from the Elysée Palace.

France on Monday reported a slight increase in the number of COVID-19 fatalities over the last 24 hours, with 335 deaths in hospital over the last day, 20 more than Sunday.

Its total death toll from the coronavirus epidemic on Monday stood at 14,967, the health ministry said.

Of these, 9 588 fatalities were recorded in the country’s hospitals and 5,379 in nursing homes.

Hi,
The Local's mission is to give our readers all the information they need about what's happening in France. We rely heavily on paying members to do that, but we have chosen not to put any of our articles about the coronavirus behind our hard paywall, to help keep all of our readers informed. We believe it is the right thing to do at this time.
This means that new or occasional readers can read articles for free. On urgent need-to-know articles and official advice about coronavirus, we are also dropping the paywall completely, either permanently or for a period of time.
Due to the crisis we can no longer rely on revenue from advertising and so our future depends on regular readers signing up.
We have received many comments from supportive readers asking how can they contribute. The best way is simply to sign up as a member. You can do that in just a few moments by clicking HERE.
As for the coronavirus, you can read all our articles here.
Kind regards,
Emma,
Editor, The Local France