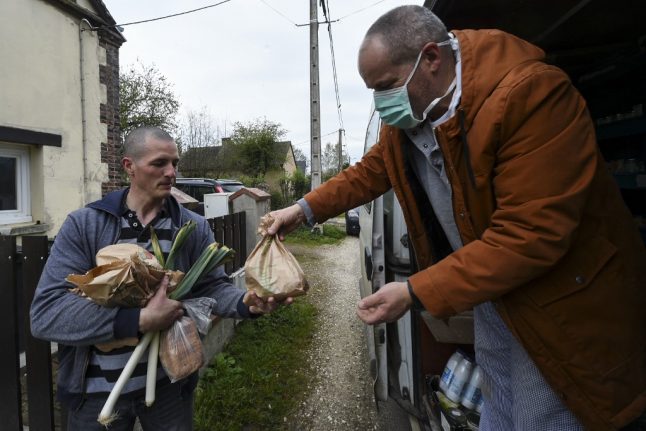 French mobile baker and grocer Arnault Carnis (R), wearing a face mask, gives food to an inhabitant of Combres, western France, on April 8, 2020, on the 23rd day of a lockdown in France to stop the sp

The overall death toll from coronavirus since the start of the epidemic reached 13,197 on Friday, the Director General of Health Jérôme Salomon said at his daily press conference.

That total includes 8, 598 patients who had died in hospital and 4,599 residents of France's elderly nursing homes called Ehpads.

Salomon (pictured below) said that hospital deaths had risen 554 compared to Thursday's total, while the number of Ehpad residents to have died rose by 433.

A child aged under 10 infected with COVID-19 died, but Salomon said that the causes of the death were “multiple”. In better news, Salomon said there were now 62 fewer people in intensive care, continuing a trend first seen on Thursday.

The epidemic has started to reach “a very high plateau” said Salomon adding that “we must remain very vigilant.”

“It's only together that we will beat the virus. Staying at home is battling the disease and saving lives, ” said Salomon.

“We have been starting to see over the last days the first effects of the  confinement,” noted Salomon, noting a “slight slowing of the epidemic”. There were 7,004 patients in intensive care units in hospitals around France on Friday, some 62 fewer than on Thursday.

Salomon described the slight drop as a “small ray of sunshine, but this slender light is very significant for all health workers”.

Overall 25,000 patients have left hospital since March 1st after recovering from the virus.

French President Emmanuel Macron is due on Monday to address the nation for a third time during the crisis.

He is expected to announce that the lockdown will be extended beyond its current April 15 expiration date.

The president on Friday hosted a video conference with business groups and union leaders to help prepare for his address.

Macron had “two messages. This is not the moment to drop our guard as the confinement is the way to halt the epidemic. But we need to think about ending the lockdown, even if it seems we are not there yet,” said Yves Veyrier, head of the FO union.

French authorities on Friday transferred 45 more patients by two TGV high-speed trains to the southwest of the country in a bid to relieve pressure on strained hospitals in the Paris region.

Some 200 patients have already been evacuated by road, rail or air from the Paris region since April 1. The southwest of the country is one of the areas least impacted by the virus.

The situation in nursing homes remains one of acute concern.

The top health official for the Ile-de-France region of Paris and its surroundings, Aurelien Rousseau, said on Friday that over 400 of the 700 nursing homes in the region had registered at least one COVID-19 case.