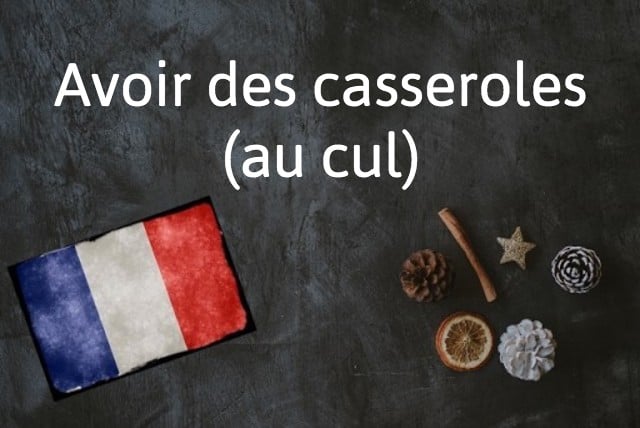 Why do I need to know avoir des casseroles (au cul)?

Because, although it sounds completely nuts, French people actually use this expression quite a lot.

French people tend to complete the expression by au cul with means ‘in the arse’. (Cul is more colloquial than fesses, which means ‘butt’).

Avoir des casseroles au cul does not however refer to someone literally having kitchenware near their rear end.

French people use it about people (often politicians) who have had their reputation tarnished by scandal.

A synonym is avoir un cadavre dans le placard – 'having a skeleton in the closet'.

No matter how hard the person tries, they can't escape the “bang-bang-bang” of the thing they did once that everyone now associate them with.

Let's say you're Dominique Strauss-Kahn, the French former IMF director who turned world famous after he was escorted out near-naked by police from a hotel in New York after an alleged sex attack.

Even if he was never convicted of anything, now il a des casseroles collés au cul – He has pans glued to his arse.

That means that whenever DSK speaks up, even if it's on the most boring economic topic imaginable, the metaphorical saucepans start banging together and people think “handcuffs! Prostitutes! Naked!”.

And so it goes for most politicians with a blemished record.

The cartoon below shows an old couple observing far right French politician Marine Le Pen pretending to act like everything is perfectly fine while two saucepans – referring to two scandals she was involved in – clatter away.

Ni plus ni moins – neither less nor more, the woman responds .

Avoir des scandales au cul – having scandals up your arse