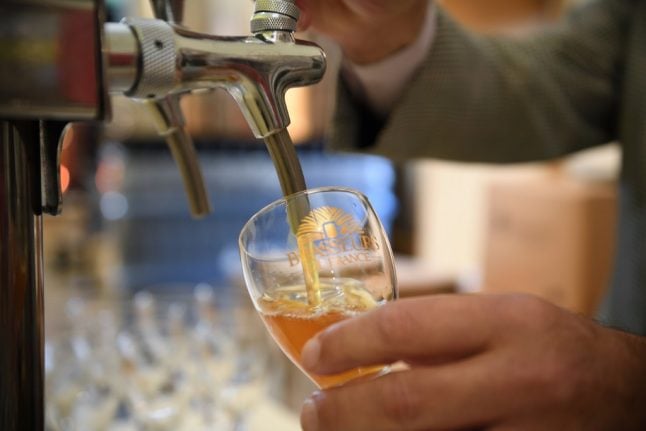 “When it's nice out, that's when you sell beer,” said Maxime Costilhes, head of the French brewers' association, noting that many have little money left in the bank to cushion the blow after building up stocks over the winter.

France may be known for its wine, but beer sales had been soaring in recent years, spurred on in part by the craft brewing trend imported from the United States.

Even Europe's dominant brewers are facing big hits from the absence of restaurant and bar sales, and the wave of scotched summer festivals, concert series and other events in the coming months.

“The impact is expected to worsen in the second quarter,” said Dutch giant Heineken, which already forecasts a two-percent drop by volume for the first three months of this year among its 165 breweries in some 70 countries.

Germany's biggest brewer Radeberger, famed for its crisp pilsner, warned that supermarket purchases by people cooped up at home would not come close to compensating for the evaporation of bulk orders from professionals.

“We're assuming that the situation won't show any real improvement in the coming weeks,” a spokeswoman told AFP.

German officials are even considering calling off the biggest beer celebration of all, Munich's annual Oktoberfest, which attracts millions of people from around the world.

Clemens Baumgartner, the party's organiser, said a decision would be made by June on whether to open as planned this year on September 19.

For Bruno Torres, who founded his microbrewery La Baleine in a gritty corner of northeast Paris a few years ago, the coronavirus crisis is nothing short of a “disaster”.

His stainless steel fermenting vats, which normally produce around 560 hectolitres (near 15,000 US gallons) a year, have been sitting empty, and nobody is buying his bottles or kegs.

“Even some smaller supermarkets don't want to open because of the health scare,” Torres said. Overall, French beer sales are expected to be flat for the year as a whole, Costilhes said, after years of rapid growth.

He did not want to speculate on how many brewers might be facing bankruptcy, but “notwithstanding what some have said, it's not certain that alcohol consumption is going up during the lockdown.”

Jacques Lebel, France director for the industry behemoth AB InBev, agreed that “beer wasn't among the products that benefited from any stockpiling effect in France during the first weeks” of the lockdown.

“Beer has been impacted less than other alcoholic beverages, but we were growing at a very slow rate compared to what we had seen in previous years,” he told AFP.

According to consulting firm Nielsen, French beer sales rose seven percent year-on-year during the first two weeks of the lockdown that began on March 15, bucking an overall drop of 3.4 percent for alcohol sales.

“If this is over by the end of April, it'll be OK, but if not, it's going to get very hard,” Torres said.

German beermakers are also warning of mass layoffs as many firms “are on the brink of failure,” said Holger Eichele, president of the country's brewing federation.

“Sales to the food sector are essential for most brewers. For some, they account for 90 percent of their revenue. And that has now completely disappeared,” he told AFP.

In the last week of March, German beer sales were down 9.4 percent on the year, the federation's spokesman Marc-Oliver Huhnholz said.

“It's because consumers are increasingly buying less, and the fact that a lot of occasions for celebrating with friends or family have disappeared,” he said.

Exports are also sinking — Italy and China, which are among the countries hardest hit by COVID-19 outbreaks, are Germany's biggest foreign markets, consuming 3.4 million and 1.8 million hectolitres respectively last year.

Foreign beer sales were down a whopping 58 percent in early April, the federation said.

Some German brewers are even urging clients to buy non-alcoholic beers, such as the family-owned Bavarian firm Volkach.

“We're giving our alcohol to hospitals and pharmacies in the region” so that it can be used to make sanitising hand gel, Volkach's Caroline Dull told a local radio station.