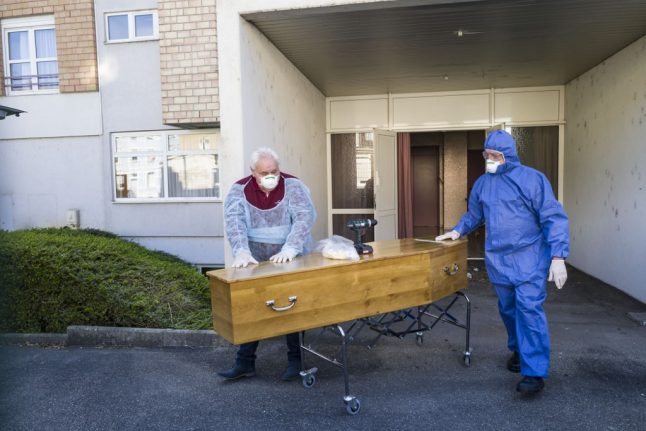 A funeral company transports a coronavirus victim out of an Ehpad in Mulhouse, the town that quickly became the epicentre of the epidemic in France. Photo: AFP

On Wednesday morning, March 18th, Christian Dumas had a slight cough. He went to work as usual at a nursing home in Lyon, where he had been a carer for nearly 21 years.

“I had a knot in my stomach,” he told The Local.

An Ehpad is for elderly people who no longer are able to take care of themselves independently. Some suffer from cognitive problems like Alzheimer’s or dementia, others from serious physical health problems.

By then, the coronavirus was circulating actively across the entire French territory.

The day before was the first day of the nationwide lockdown that had confined the country to their homes and halted most economic activity.

In the Lyon region of Auvergne-Rhône-Alpes, 858 people had tested positive for the virus. Because few were actually tested, the real number was likely higher. A nurse ensures that a resident at an Ehpad in the west of France is hydrating properly. Photo: AFP

Christian was not the only staff member who had developed a cough.

He and his colleagues knew that the elderly people they cared for were at high risk of falling severely ill if they caught coronavirus.

They also knew that their presence, now more than ever, was key to the residents' wellbeing. The government had banned all visits into the country’s long term care homes on March 11th and the carers were now the only social contact the residents had access to.

“We told ourselves that we would do everything in our power to take good care of our residents,” Christian said.

But they lacked masks and other protective gear.

“I was wearing my own glasses, not protective ones, although I knew there were coronavirus cases on the floor where I was working,” he said.

That Sunday, March 22nd, Christian’s cough got worse. He had “a fever and other symptoms” and went straight to the doctor the following morning. He was put on leave and told to get a coronavirus test. A few days later, the test came back positive.

Over the past week they have got an unusual amount of attention by French media, after national health authorities released the first coronavirus deaths recorded inside these homes.

For a long time, only hospital deaths were included in France’s official coronavirus tally and countries including the UK, Spain and Italy still do not include nursing home deaths in their official death toll.

A first provisional estimate of “at least 884” nursing home deaths since March 1st was confirmed on Thursday, April 2nd.

Just a week later, April 9th, the care homes had reported a death toll of 3,237. But the real tally is likely much higher, as many establishments have yet to release their numbers.

When asked why it was taking so long, French health chief Jérôme Salomon said they were having “technical difficulties” getting the numbers from the establishments.

As coronavirus spread like wildfire, care home representatives sounded the alarm bell that their residents would be hit especially hard and especially rapidly. In a letter to Health Minister Olivier Véran, sent on March 20th, carers said they feared 100,000 residents could die from the virus. Filhol works as an administrative assistant at Les Lilas, an Ehpad in Val de Marne, a Parisian suburb south of the capital. She and her colleagues had lost two out of 71 residents since the beginning of the coronavirus epidemic. One of the deaths was a confirmed coronavirus case.

“We have known about the coronavirus since January. No one cared about the Ehpad until late March. That’s a problem, don’t you think?”

Filhol, also a CGT union representative, deplored a lack of attention from the government’s side that she said had begun years ago and now was showing its deadly impact.

“This government is looking at everything like a business,” she said. An Ehpad employee in the Auvergne-Rhone-Alpes region cuts fabric to make inprovised masks to prevent the spread of the COVID-19. Photo: AFP
Filhol's administrative post permitted her to work from home. But she said she chose to come into work every day to ensure that the building was properly cleaned. They were cleaning incessantly.

“Everyone is doing everything now,” Filhol said.

“We are doing everything we can to limit the risk of contagion.”

Of the 23 carers, six were on leave during the lockdown.

That meant 17 employees were now responsible for all of the 69 residents, who now were isolated in separate rooms. Separating everyone had proved an efficient strategy as they seemed to have managed to contain the virus, but it was having dangerous side effects, Filhol said.

Seemingly simple tasks like meals had turned in to enormous challenges. Serving plates in separate rooms demanded more manpower than feeding everyone together in the dining area.

Already short on staff, there was no way carers could sit down with every single resident and ensure that they finished their plates.

“If you leave a food tray in the room of a resident, chances are it will be untouched when you come back an hour later,” she said.

Their residents' psychological state had “degraded” since the beginning of the lockdown, she said.

“People need to understand what an Ehpad is. It’s a place for very old, very ill, extremely vulnerable people.”

“If you have a daughter who brings you a strawberry tart every Sunday, and then suddenly she has to stop, of course that has enormous consequences,” she said. A resident at a care home in Brest, western France, gets a hair makeover in early March, before the new lockdown measures entered into effect. Photo: AFP
An Ehpad is not a hospital. It is a place where social care is just as important as medical care. After the new isolation orders, “spreading smiles” suddenly got a whole new importance, Christian said.

The last week before he got sick he went from room to room to help the residents use modern technology to get in touch with their families.

One “papi” had lots of children with whom he spoke to constantly on the phone. Another with hearing problems was struggling to understand what his wife said on the phone, so Christian would repeat what she said (very) loudly.

Christian and Barbara’s workplaces were among the lucky ones.

By time the lockdown measures entered into effect in nursing homes in areas harder hit by the virus, it was already too late.

In many areas, the virus had spread inside the walls of the Ehpad, causing a cluster where both residents and staff were trying to fight it off without the necessary tools. They were lacking masks and other protective gear.

“It’s body bags instead of masks, the message is pretty clear,” one Ehpad director told French daily Le Monde, after he had been encouraged by a government official to stock up on body bags before they ran out.

Crucially, they lacked means of testing their residents and staff for the virus.

“The government has said that they are aiming to test every resident in every Ehpad in France,” said Corinne Boreux, Director of the Ehpad La Seigneurie.

“Like everyone else, we’re waiting for that day to arrive.”

Situated in Seine-Saint-Denis, a northern Parisian suburb that has been hard hit by the coronavirus, la Seigneurie had also suffered badly. Of 280 residents, about 35 are now showing coronavirus symptoms. A resident at a care home in the west of France. Photo: AFP

So far, Boreux had registered 10 fatalities as ‘supposed’ coronavirus fatalities. ‘Supposed', because they were not tested.

As a general rule, an Ehpad with three or more positive cases is considered a ‘cluster’ and is told to start testing their residents. La Seigneurie was able to test five residents in total.

Since then, the burden of deciding if a resident died of coronavirus or something else had fallen on Boreux.

“It's important to understand that we see a lot of deaths throughout the year,” she said.

“It’s hard to know if a 100-year-old woman died from coronavirus or something else.”

La Seigneurie also lacked tests for their personnel. Twenty-two carers had so far tested positive for the virus, but, as was the case of Christian in Lyon, they went elsewhere to get a test for the virus.

After he tested positive, Christian alerted his colleagues.

“It turned out that I was the fourth coronavirus victim on the staff,” he said.

Three other colleagues had already tested positive for the virus, without the rest of the staff being alerted.

In retrospect, Christian said, it was easy to “see through the fog” and recognise all the errors that were made.

“On some level, we knew that we were taking risks and that we were also putting the patients at risks,” he said.

“We were told we were heroes, but, looking back, it's clear we were sacrificed.”