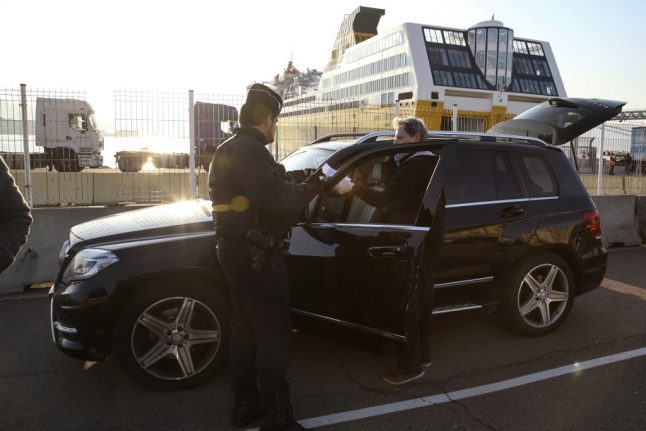 Strict border controls are among the recommendations. Photo: AFP

The Conseil Scientifique (scientific council) that advises the government say that three conditions need to be fulfilled before restrictions can be loosened.

On Tuesday, the council's leader Jean-François Delfraissy, listed the main demands that needed to be fulfilled before the déconfinement (unwinding of the lockdown) could begin. The council is advisory, so these are not legally binding.

Even once these are fulfilled, there will likely be a gradual loosening of restrictions rather than a complete lifting of the lockdown. Crucially, the pressure on hospitals – especially on the intensive care units – will need to be alleviated before an unwinding of the lockdown can begin.

“The short term goal of the lockdown is to ease the pressure on the intensive care units by reducing the number of serious cases,” the Council wrote in a statement released on April 2nd.

One of the biggest challenges the country has faced since the outbreak turned into an epidemic has been the surge in the number of people needing urgent hospital care.

At the start of the outbreak there were just 5,000 intensive care beds for the whole country, this was rapidly expanded and at present there are more than 7,000 patients needing the highest level of care.

Hospitals in eastern France and the greater Paris region have been particularly hard hit and the government has intensified the transfer of patients between regions and has built a military hospital in Mulhouse, the town that was hit the earliest and became the country's coronavirus epicentre. Patients are being evacuated from the worst hit areas in specially adapted trains. Photo: AFP

While the country's intensive care rates have been slowing down over the past week  – Wednesday saw the smallest net jump yet recorded (17) – the current state in the hospitals was still very pressured, the Council said this week.

2. Reduction in the number of new cases

The council says there must be a “significant reduction” in the number of new cases reported.

This is actually more tricky to calculate than it might seem, as the number of confirmed cases depends heavily on the scale of testing.

France is in the process of widening out its testing programme.

At present it is mainly people with severe symptoms (and healthcare workers) who get tested and authorities have admitted that the real number of cases is likely to be much higher than the official total of 112,000 as people with only moderate symptoms who do not go to hospital never appear in the official statistics.

So as testing is widened it is likely that numbers will climb quite steeply.

However the Council says that “ideally, this reduction should be sufficiently significant to make the systematic detection of new cases possible again.”

At the beginning of the outbreak, new cases were confirmed with testing and everyone they had been in contact with was then tested. As the numbers grew this became impossible, but it looks like the Council would like to see a return to this type of model. Health minister Olivier Véran says the target for testing is 100,000 people a day, but the deadline for this is not until the end of June.

3. A full post-lockdown strategy is in place

There is a separate working group looking specifically at how the lockdown can be eased, but the Council recommends that any strategy for easing restrictions must include

Prime Minister Edouard Philippe has already warned the population of France that the release will be a gradual process, although which restrictions will be lifted first has not been confirmed.
Director General of Health Jérôme Salomon has also also confirmed that easing restrictions will be gradual, with large public gatherings the last thing to be brought back.
President Emmanuel Macron is set to address the nation on Monday evening on the subject of lockdown continuation and what happens next.
Restrictions could be lifted on a regional basis, but a number of maps circulating on social media claiming to show which regions will be released first have been dismissed by the government as fake news.
The below map is probably the most accurate reflection of the lockdown at present, with regions either advised to restez chez vous (stay home) or restez chez vous bordel (stay home, for fuck's sake).