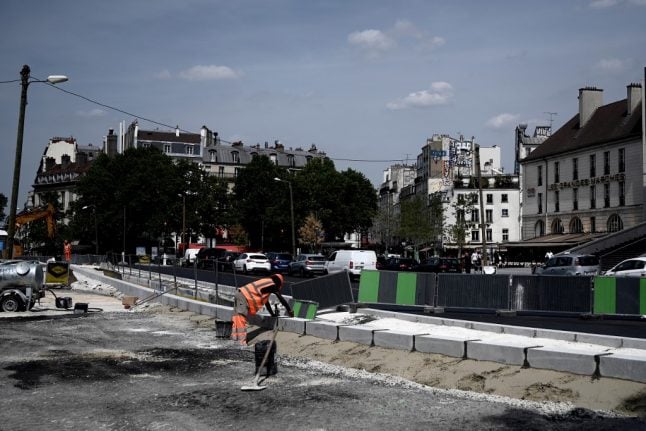 The green and grey barriers will be a feature of Paris for some years to come. Photo: AFP

During lockdown almost all work has been suspended, but once the restrictions lift work will begin again.

Among the things on the cards are a major expansion of the Metro network out into the suburbs, a complete revamp of the connection between the city and its major airport and ongoing work to make Paris a cyclist friendly city.

Here's a look some of at the projects underway in 2020. New Metro tunnels are being dug all over Paris as part of the Grand Paris Express project. Photo: AFP

Metro line 14 is to be extended from its current northern terminus at Saint-Lazare to Porte Saint Ouen on the northern edge of the city and four new stations – Pont-Cardinet, Clichy-Saint-Ouen, Mairie-de-Saint-Ouen and Porte-de-Clichy – created.

This project is well underway, the lines are constructed and the first test train arrived at Mairie-de-Saint-Ouen just before the lockdown began. However the testing of the line needs to be completed and construction finished on the four new stations. Its current finish date is September, and at this stage it is not known whether that is still likely.

Metro lines 1 and 14 are already automated, with all trains operating without drivers, and line 4 is the next on the list for this treatment.

Work on the line had already begun, as well as the installation of automated doors on the platforms. During the lockdown engineers are continuing to run tests on the work already done, since this can be done safely with social distancing, and once work starts properly again they can begin work on the control centre for the automated trains.

Tourists currently landing at Paris' major airport access the city through the shabby, unreliable and frequently overcrowded RER B, not giving a great first impression.

However this is set to change with the creation of the CDG Express. Running directly between the city and the airport, while the RER also serves the northern suburbs, it will cut the journey time and hopefully provide a more pleasant travelling experience.

Regional authorities have already pushed the completion date back from 2024 to 2025 after hearing that completion in time for the Olympics would mean closing the existing airport link during the summer peak tourist season.

READ ALSO IN PICTURES: What Gare du Nord will look like in 2024 Gare du Nord is getting a major makeover, and not before time. Photo: AFP

Another project that was set to be completed for 2024, work hasn't actually begun yet on the major refurbishment that is set to transform the dark, scruffy, cramped and labyrinthine station into a modern gateway to the city.

Political and architectural infighting marred the beginning of the project but the first 'shovels in the ground' work was due to start this summer.

Depending on the length of the lockdown, that could be postponed.

Paris' tram system is relatively new and at present serves the city's inner suburbs – the petite couronne – running in a circle alongside the Paris ringroad.

However alongside plans to complete the circle, there is also a project to expand the network including the T9 scheme to link the city to the town of Orly on the southern outskirts (but not the airport).

Work was well underway on this and opening was scheduled for the end of 2020.

Line 11 will be extended out from its current terminus at Marie des Lilas for another 5km running east to Rosny-sous-Bois with the addition of six new stations.

Work began in 2015 was well underway before the lockdown started, both on the extension of the line and the remodelling of Mairie des Lilas station. It is scheduled to open some time in 2021. The new Line 15 will run in a circle around Paris' inner suburbs. Photo: AFP

The extension of lines 14 and 11 are both part of the Grand Paris Express.

This is a massive project, begun in 2013 and running until 2030 to expand the Metro right out into the suburbs.

Line 15 will run as a loop through the suburbs of Paris while lines 16, 17 and 18 will run out to the outer suburbs and small towns outside Paris.

This is not actually an RER line at all, but the name given to the project of a network of cycle paths to link Paris to its suburbs.

The city of Paris has seen a huge increase in cycle lanes under mayor Anne Hidalgo, with more planned in the coming years (depending on whether she wins the postponed municipal elections or not).

However many of the paths stopped at the city limits. The 'RER Vélo' aims to continue cycle paths out into the suburbs, making commuting by bike a viable options for the many thousands of people who travel into the city from the suburbs to work every day.