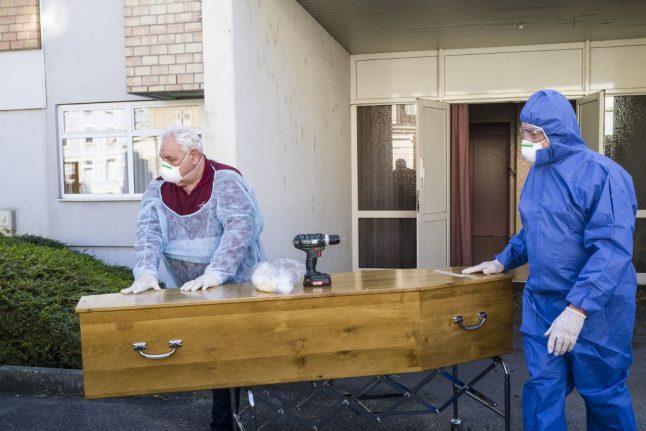 The situation in France remains extremely serious but there is cause for optimism. Photo: AFP

French health authorities run daily briefings and the latest make for difficult reading – the death toll now stands at 15,729 – up from 10,000 a week ago and 4,000 the week before that.

Every day in France hundreds more patients die in both hospitals and care homes.

READ ALSO ANALYSIS What next for the coronavirus epidemic in France

But while all that sounds relentlessly negative, looking closer at the data does provide some positives.

While France appears to have one of the highest death tolls in Europe, many countries are at present only counting deaths in hospitals.

Italy and Spain only count hospital deaths, as does England and Wales (although Scotland does include care home deaths in its statistics).

But with elderly people with underlying health conditions proving the most vulnerable to coronavirus, France's Ehpad retirement homes have seen thousands of deaths.

Of the 15,729 deaths recorded in France, 10,129 were in hospital and 5,600 in care homes – suggesting that the real death toll in many countries could be a lot higher.

The nursing homes reported all deaths since the beginning of the outbreak, so many of the 'new' deaths recorded in that week had actually happened several weeks before.

The death toll seems to have spiralled in the last week but the huge jump in numbers is partly caused by data for deaths in nursing homes becoming available – previous totals included only those who died in hospitalshttps://t.co/yeFGpSYue3

The inclusion of data from nursing homes is not straightforward because many of their residents are already in a very fragile state, so it is not always possible to say that coronavirus was the cause of death. A programme of mass testing of Ehpad residents is now being rolled out.

It has also proved logistically difficult to collect data from nursing homes on a daily basis. On board one of the specially adapted trains taking patients out of the worst hit areas. Photo: AFP

There are currently 32,000 coronavirus patients in French hospitals and of those, 6,700 are so seriously ill that they require intensive care.

This has put massive pressure on the health system – which at the start of the outbreak only had 5,000 intensive care beds for the entire country.

Short thread on France and covid-19. It increasingly looks as if France will not be following as awful a trajectory as Italy and Spain. This is showing up in a series of tentatively encouraging data points over the past 4-6 days 1/6

Experts have repeatedly said that this is the key number to watch.

And while the number of the most seriously ill patients remains high, it has been steadily falling in recent days.

For the last six days in a row, France has recorded progressively fewer patients in intensive care.

“Although the situation is less tense now than some days ago, it's still tense,” said Célestin-Alexis Agbessi, a doctor working at the Bichat hospital in Paris, which now only takes coronavirus patients.

France's Director General of Health Jérôme Salomon added on Tuesday: “'We have seen a plateau for several days now, but the pandemic remains very active.”

There is much talk of 'the curve' compared between countries – or how the daily death tolls look when they are plotted on a graph.

The totals have stayed steady at 400-500 people per day, allowing for possible under-reporting over the long Easter weekend.

Graphs such as this tend to use hospital deaths because the data is updated every 24 hours and has been supplied since the beginning of the outbreak, so is easier to spot trends in.

Predicting trends is far from an exact science, but in Italy several days of similar death tolls were followed by a slow but steady drop.

However much depends on how strictly people obey the lockdown rules, with many worrying that the fine weather will encourage people to go out and about.

“A major factor in determining what happens next will be how the general public behaves.” said Daniel Camus, a professor at the Pasteur Institute in Lille researching the coronavirus.

“There's a tendency that some growth rates are slowing down, but that certainly does not mean that we have passed the peak and reached the second part of the epidemic curve.”

Nevertheless, the news is sufficiently good that the French government has laid out its roadmap for the end of the lockdown – although there will be no change before May 11th.

READ ALSO Lockdown in France – what happens next?