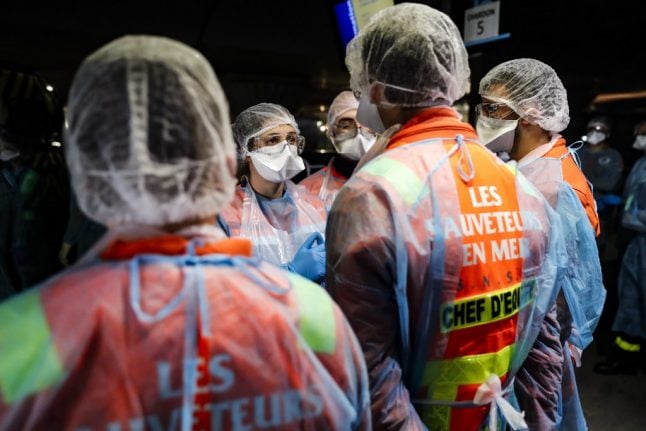 The total number of coronavirus deaths included 7,632 fatalities in hospitals since March 1st.

The remaining deaths were reported in the country's elderly care homes (known as Ehpad). However far from all the Ehpad nursing homes in the country have reported their death tolls.

France's Director General of Health Jérôme Salomon said that due to a technical fault there was no daily data available from the Ehpads on Wednesday, and that the overall death toll was likely incomplete. On Tuesday he gave the death toll in nursing homes since the epidemic began as 3,237.

Salomon confirmed that a total of 7,148 coronavirus patients were in intensive care in French hospitals on Wednesday.

A total of 30,375 people were receiving hospital treatment on Wednesday.

“It's a considerable number,” Salomon said.

On Wednesday the overall net increase was only 17 from the day earlier, the smallest intensive care jump recorded in recent weeks – beating the former record of Tuesday. (+59).

At the beginning of April the number of patients in intensive care was rising by several hundred each day.

“We have doubled our national intensive care capacity,” Salomon said in the evening press briefing. “We're doing everything (..), to ease pressure and support our hospitals.”

Salomon and other health experts have pinpointed intensive care rates as key to monitor the epidemic curve.

Salomon said he hoped France would see a flattening in its curve of cases in coming days but emphasised that this “plateau is at a very high level.”

Wednesday's daily hospital death toll of 541 was smaller than than the day before (607) and Monday's (605). It was, however, larger than the 441 and 357 reported on Saturday and Sunday respectively.

Again, the health director announced some positive news, as the number of people who had completely recovered since the beginning of the epidemic had increased to 21,254. That number only included those who were admitted to the hospital, Salomon said, “not the thousands who had recovered at home.”

France has been on a national lockdown since March 17th and will likely remain so for weeks to come. The current end-date is set to April 15th, but the country's Scientific Council – the body specifically selected to advise the government on their steps to tackle the virus  – told French media this morning that the lockdown should last for several weeks longer.

Salomon said he understood that staying at home was difficult, but said respecting the confinement rules was key in combating the virus.

“It feels like you are being passive, but you are actually making a big difference,” he said.

“By staying at home, you are saving one life every eight minutes.”

France counted 82,000 confirmed coronavirus cases on Wednesday, but that was only those who had been tested and the real number was expectedly higher.
Since the beginning of the lockdown, the country has reduced its contagion rate from 2,5 to 1, meaning the average victim now infected less than one person –
“You are our most efficient weapon against this virus,” Salomon said.