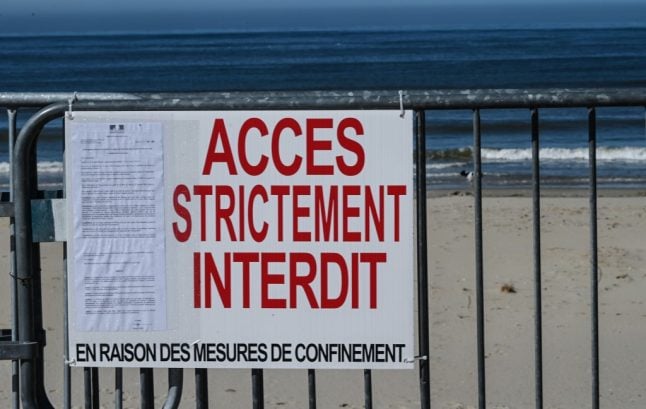 The beach at Le Touquet is one of many that is out of bounds. Photo: AFP

The cry across France is restez chez vous (stay home) and strict lockdown rules govern every trip outside the home.

But the national rules are only half the picture as more and more local authorities are adding extra rules, which are also punishable by fines if broken.

READ ALSO EXPLAINED These are the rules of lockdown in France Many local authorities have extra rules in place. Photo: AFP

The result is a hotchpotch of rules that vary according to where you live – so we advise everyone to check the website of their local préfecture to find out about local restrictions during this time.

Here is a look at some of the extra bans that have been put in place, many in response to requests from local voters.

Being forced to listen to your neighbour's DIY efforts when you are stuck at home is annoying, but for nightshift workers including crucial healthcare staff it can mean a loss of vital sleep.

When nurses at Morlaix hospital complained that they couldn't sleep during the day, the mayor of Morlaix banned all noisy activities including DIY and mowing the lawn between the hours of 9am and 3pm.

In the commune near Lille in north east France, throwing a face mask or gloves onto the street is punishable by a €68 fine. The decree all also bans spitting and sneezing without covering your mouth. The mayor acted after complaints from municipal garbage collectors about surgical masks strewn over the streets.

The nationwide rules already ban travel for non-essential purposes such as holidays, but there have been reports of people travelling anyway to their holiday homes, especially over the Easter period. In response the mayor of Chamonix, an Alpine town with a high number of second homes, has banned all rentals of less than 14 days.

“This may seem redundant, but we have seen the arrival of holidaymakers on Saturday [the first day of the school holidays in Ile-de-France and Occitanie],” mayor, Eric Fournier told local media. The mayor and police chief in Paris have banned all outings for physical exercise (which does not include going for a walk or dog walkers) between the hours of 10am and 7pm. The idea is to move joggers to a time of day when the streets are less busy with people going to work or shopping.

However nearly all of the départements except for Paris decided against reintroducing the ban when they expired. Daytime jogging is now currently forbidden only in the capital and seven communes in Val-de-Marne that border on Bois de Vincennes.

The département on the outskirts of Paris announced on Wednesday that all shops, with the exceptions of pharmacies, must now close at 8pm after earlier restrictions on shopping hours were not respected.

Several other départements have also limited opening hours of shops, including Aisne in north east France.

Walking on the beach – Provence-Alpes-Côte d'Azur, Corsica and Occitanie

The three regions that cover the south coast of France have all banned access to beaches after people were seen gathering and socialising on them.

Walking by the Seine – Paris

Paris authorities have closed the walkways along the Seine and the Champs de Mars to everyone apart from essential delivery staff. Compulsory masks – Nice and others

Several local authorities say they will make wearing a mask compulsory in public in the coming days, although the French public health authority merely says that it advises people to wear a mask if they wish to.

Many local authorities have banned all trips outside the home – with the exception of essential shiftworkers – at night.

At least 20 local authorities have announced curfews so far, including Nice, Arras, Perpignan, Beziers and Montpellier.

“We are continuing to see irresponsible behaviour by some people,” said mayor of Nice Christian Estrosi.

But not all efforts by local authorities to introduce stricter controls have been successful.

Here are some of the suggested measures that did not take place;

The Préfet of Aisne suggested a complete ban on alcohol sales at supermarkets and grocery stores during the lockdown. As cafés and bars are already closed, this would have rendered the département totally dry.

His concern was that alcohol could make domestic violence – already a growing problem all over France during the lockdown – worse, but after a bit of an outcry the proposed ban was withdrawn for more consultation.

Local officials in Biarritz proposed a ban on sitting down on public benches for more than two minutes, but this was withdrawn after a threat of legal action.

Valid reasons for trips outside the home include getting exercise and while you are allowed to pause for a rest during your walk or run, loitering on benches is not allowed and you are likely to be moved on by police if you linger.

National rules limit trips out for exercise to within 1km of the home (there is no distance limit on trips out for shopping, medical appointments or work) but the mayor of Sanary-sur-Mer, near Toulon, attempted to limit that still further. He withdrew his proposed ban after a protest from préfectural authorities.

While local mayors in France do have quite a lot of power, it is not unlimited.

“There must be specific local circumstances and these mayors must be able to demonstrate that the measure is essential to maintain public order in the broadest sense, which includes the fight against epidemics,” Yvon Goutal, a lawyer specialising in local government law, told Le Parisien.
“In case of doubt, the préfecture, an inhabitant or an interested party can refer the matter to an administrative court.”
This is not a complete list of restrictions, please check the website and social media of your local authorities for the rules in your area.