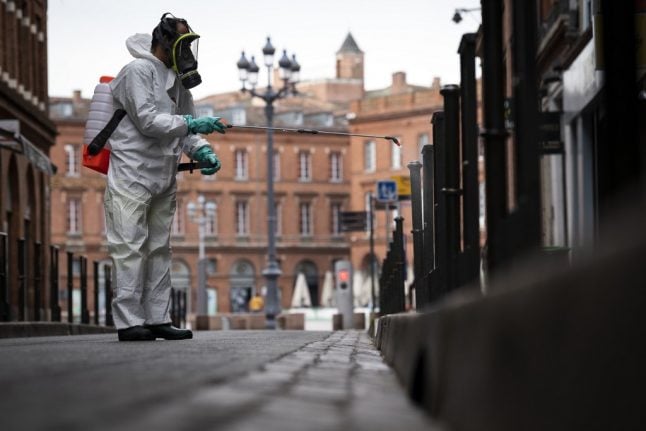 “It is not over. Far from that. The path is long,” said France's Health Minister Olivier Véran.

On Tuesday France passed the grim milestone of 10,000 dead, with another 7,000 people critically ill in intensive care.

“A major factor in determining what happens next will be how the general public behaves.” said Daniel Camus, a professor at the Pasteur Institute in Lille researching the coronavirus.

“There’s a tendency that some growth rates are slowing down, but that certainly does not mean that we have passed the peak and reached the second part of the epidemic curve,” he said.

Since the beginning of the coronavirus epidemic, experts have been cautious of predicting the future and stressed that no one could really know what lurked around the next corner. France – and the whole world – is treading uncharted territory, they stressed.

BACKGRUND: Analysis – When will the coronavirus peak in France?

Camus said the nuances, uncertainty and volatility of the situation needed to be conveyed to the public to prevent a premature optimism from settling in.

This weekend the sun came out, and a surge in the number of people out on the streets was reported. This had French health personnel sounding the alarm and criticising the public for reckless, short-term thinking.

“These people are the people that in 10 days or two weeks will fall very ill,” he said.

Agbessi “really hoped” the relapse over the weekend would provoke a surge in the number of deaths, but said there were a lot of people in intensive care still.

“That means that there are a lot of people at the risk of dying,” he said. Bichat, previously a specialist fever hospital, has transformed into a coronavirus only-hospital. They have increased their number of intensive care beds to 300 by transforming section after section of the hospital into intensive care areas.

And yet still little a dozen patients have joined the TGV médicalises trains taking patients to other, less strained areas of the country. While the total number of patients was not decreasing yet, Agbessi said the pressure of new critically ill patients had “eased slightly.”

“Although the situation is less tense now than some days ago, it's still tense,” Agbessi said.

'The lockdown is saving lives'

While France reached the dreaded milestone of 10,000 deaths on Tuesday there were other, more promising, statistics packed inside the daily health briefings.

One crucial number was the rate of new intensive care admissions in French hospitals, which continued the trend of slowing down.

Ninety-four new patients were admitted to intensive care in France on Monday. On Sunday, the number was 140, on Saturday it was 176, on Friday 263 and on Thursday 382.

“We are convinced that the lockdown is saving lives,” Véran said. France began a nationwide lockdown starting on March 17th to keep the public inside their homes as much as possible and stem the spread of the virus.

The strict measures were now beginning to have “a palpable impact,” according to the health minister.

France will remain on lockdown until at least until April 15th, probably longer. How the country will ‘se déconfiner’ (put an end to the lockdown) is still a question to me answered.

As the government changed its previous health advice, saying that everyone should wear a face masks if they could, an increasing number of local authorities have announced that they would make masks mandatory for their inhabitants.

READ ALSO: Mask or no mask – what is the official coronavirus advice in France

“When it comes to infectious diseases, we are constructing a protective wall consisting of several bricks,” Camus said.

“Masks are one brick, handwashing another, social distancing a third, etc.”

“It would be great to have all the bricks, but, if you don't, you need to reinforce the others.”

“Not having masks won't put a stop to everything, but the key is to strengthen the whole wall.” “Thanks for helping, stay home” says a sign outside a hospital in France. Photo: AFP

'We should all wear masks'

Agbessi said masks would be key in preventing a second wave from hitting as soon as the government begins to loosen up its lockdown regulations.
“It’s not a miracle solution, but it’s efficient,” he said.
It could not replace other, general health habits like frequent and thorough handwashing and sneezing into your elbow, Agbessi said.
Regular cloth masks do not prevent the holder from getting the virus, but they drastically reduce the risk of already contaminated people people from spreading it to others.
“We should all wear masks just from politeness,” Agbessi said. “Even people who don’t feel sick could contaminate others by sheer ignorance.”

Agbessi added that: “If you’re sick, you should wear a mask even when you’re home.”

“There are horrible clusters inside families. We have a patient now who already lost both of his parents to the coronavirus. His brother is also very sick.”

“These are real stories from the hospital that people need to know about.”

“It's important that they understand that when they are behaving recklessly, they are not just putting themselves at risk, they are risking the lives of people they love.” President Emmanuel Macron this week paid a visit to a mask producing factory in Saint-Barthelemy-d'Anjou near Angers. Photo: AFP

Agbessi said our societies must change our culture when it comes to social norms to prevent a new coronavirus-like scenarios in the future.

“Life will never be the same,” he said. “We need to start preparing for the 'after' now.”

He envisaged an ideal future inspired by the model of some Asian countries. The hospital doctor drew the picture of a less contagious world where people, out of caution for the other, wore masks as an accessory whenever they were ill, where no one shook hands or – if French – did la bise.

“We need to adapt our societies and find new ways to socialise,” Agbessi said.

La bise – greeting someone with a kiss on the cheeks – would “absolutely” have to go to secure the greater good.

'We could see 'yellow vest'-like disobedience'

What happened next, Camus said, would largely depend on how the general population behaved in the coming days.

Camus feared that, as research became more uncertain (the longer the lockdown lasted, the less scientists could say with certainty), decisions would inevitably become political.

“Political decisions are always much more contested than scientific decisions,” he said.

“If people disagree with what is being decided we could see a social movement similar to the 'yellow vests' disobeying social orders and taking to the streets,” he said.

“It's something to look out for in the coming weeks.”

“It's enough if a small percentage misbehave to wreck the wall that we have built to protect ourselves from the virus,” he said.