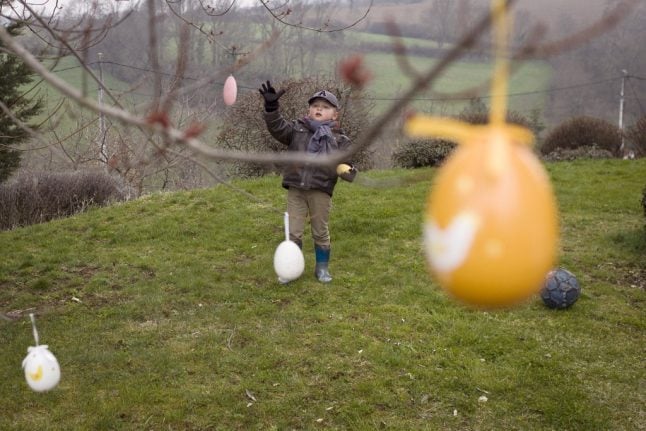 If you have a garden you could stage your own egg hunt or egg rolling. Photo: AFP

Easter – which falls on April 4th this year – is usually a big family event in France, with many people travelling across the country to stay with relatives and towns holding special markets and festivals.

Some of those things will not be possible this year, but that doesn’t mean that we can’t celebrate, or that some traditions cannot be observed.

Here’s the latest on rules and advice regarding travel and socialising over the Easter weekend.

So here’s what we can do. These will be flying to Rome on Friday. Photo: AFP

While in some parts of France, generally in the east, the lapin de pâques (Easter bunny) or lievre de pâques (Easter hare) makes an appearance, in most of France the legend is that chocolate is magically delivered by flying church bells.

French Catholic tradition says that on Good Friday (the Friday before Easter), all church bells in France sprout wings and fly down to the Vatican to be blessed by the Pope.

So no church bells ring between Friday and Easter Sunday morning, to commemorate the death of Jesus (and because they’re all in Rome, obviously).

After their getaway to Italy, the bells return to France laden with goodies for well-behaved children – namely chocolate eggs.

Most arrivals from the EU into France need a Covid test, but magical, non-human travellers are probably exempt. In a slightly questionable tribute, chocolatier Jean-François Pré created this Easter Egg which is in the shape of the coronavirus virus. More tasteful chocolate is available. Photo: AFP

Which brings us neatly to eating chocolate. Trips to the shops are very much still permitted and most supermarkets are now full of tasty Easter treats including giant chocolate eggs, while patisseries and chocolateries are classed as essential under lockdown rules.

Chocolate bunnies and chicks are also popular, as well as chocolate bells and chocolate fish – a reference to the poisson d’avril.

Churches services for limited numbers of people are allowed and some churches are also planning to celebrate Mass online for those who cannot attend.

Naturally boulangeries and patisseries are counted as essential businesses in France, with their windows as full as ever with beautifully decorated little cakes and pastries.

There isn’t a particular traditional Easter desert in France, but it wouldn’t be a celebration without getting something from the patisserie to end the Easter meal with.

Anything with chocolate is popular, particularly cute little chocolate nests, and seasonal fruit like the first strawberries are often seen too.

A lot of towns usually organise a chasse aux oeufs (egg hunt) as well as various French chateaux in their grounds. Public gatherings of more than six people are not allowed and the government has asked everyone to stop receiving people at home. But you could enjoy a mini-Easter picnic outdoors (just remember that consuming alcohol out in public now is forbidden).

Another rather messy tradition in some parts of the country is egg rolling or egg tossing. Raw eggs are either rolled down a slope or thrown into the air, and the last person to keep their egg intact gets a forfeit of chocolate from the other players.

Having visitors to your home is not recommended (although not actually forbidden) but you can still cook yourself a nice lunch – lamb is the traditional Easter food, symbolising Jesus and also new life. People who do socialise are urged to do it outdoors – the weather forecast for the whole of France up until Sunday is for sunshine and warm temperatures so an Easter picnic with a small group could well be on the cards.

And to keep the traditions going, you could always make yourself an omelette on Monday.

The town of Bessières in south west France usually creates a 15,000-egg omelette on Easter Monday for the whole town to share, in a tradition that apparently dates back to Napoleon.

That won’t be happening this year, but you could always create your own eggy tribute to the emperor on Easter Monday. Members of the Giant Omelette Brotherhood of Bessieres will be sadly under-employed this year. Photo: AFP

Have a day off

Plenty of people are not working at all at the moment, but for those who are, Easter Monday – April 5th – is a public holiday, so you can take a day off work and go for a walk, read a book or catch up on your box sets.

If you are in Alsace-Lorraine you will also get Good Friday off work, the only parts of France where it is a public holiday.