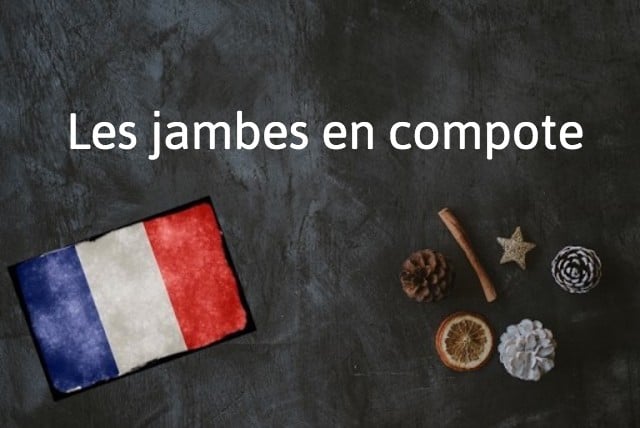 Why do I need to know les jambes en compote?

Because it’s arguably the best way to sneakily brag about your workout in French.

Avoir les jambes en compote translates to ‘having legs of compote’, which is a cute way of saying that you have wobbly legs ('jelly legs').

Compote is the French fruit mush that is stuffed into small cups or soft plastic bottles, often given to children as a goûter (afternoon snack) or dessert. It’s soft like a yoghurt and having legs that feel like this means it’s definitely not the day to embark on a marathon.

Avoir les jambes en compote is a great way of secretly bragging about your workout routine. Let’s say someone asks you ça te dit qu’on aille courir ce soir après le boulot? – Do you want to go for a run this evening after work?

If you are practicing social distancing or are in a coronavirus lockdown and decide to try the do-it-at-home French Foreign Legion workout, c'est sûr que tu auras les jambes en compote demain – you're sure to have jelly legs tomorrow.

Legs aren’t the only body part that can be filled with compote, avoir les bras en compote means having jelly arms.

Nor are les jambes en compote necessarily something that follows an intense workout. You can use it when you're feeling extremely tired, for example as you get home from work.

While there are many other ways to say that you're exhausted in France, none are as telling as avoir les jambes en compote when you want to specifically direct the attention towards your legs.

Je suis crevé (I'm exhausted) or je suis mort (I'm dead) are good ways of expressing that you're really tired, but it doesn't refer to the specific body part.