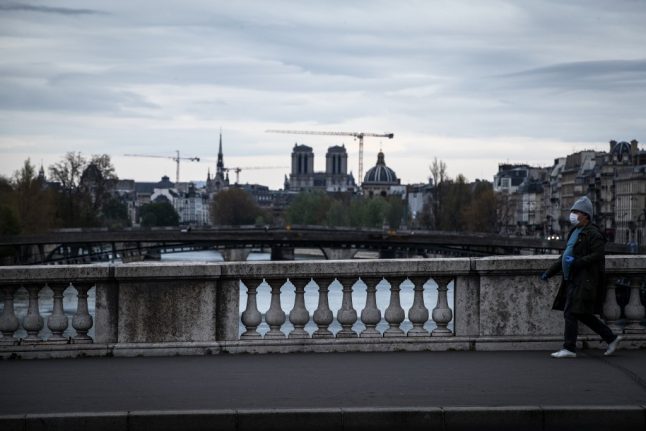 The southern city of Nice was the first city to make the move when Mayor Christian Estrosi on Monday evening announced that, soon, everyone would need to wear a face mask when out on the streets.

“In eight to 10 days, all inhabitants will receive a mask that they can reuse for a month,” Estrosi told journalists, adding that the city’s inhabitants would receive more information by Wednesday evening.

Others quickly followed suit. By Tuesday morning, the mayors of Cannes, Sceaux in the Hauts-de-Seine département (southwest of Paris) and Mandelieu-la-Napoule in the Alpes-Maritimes département announced similar decisions.

“I've asked that sufficient stocks be made available as soon as possible so that we can provide masks to everyone,” said Sebastien Leroy, mayor of Mandelieu-la-Napoule in a tweet.

The distribution would be free, he said.

The idea of making masks mandatory for the general population starkly contrasted with what until recently was the French government's official health advice around the coverings.

READ ALSO: Mask or no mask – what is the official coronavirus advice in France

Partly concerned with panic buying emptying their already meagre stocks of masks, the government said only people already infected, their carers and health workers needed to wear surgical face masks. For everyone else they were useless.

The French government's advice echoed that of the World Health Organisation which stated that fabric masks would not protect people from the droplet infection that transmits the virus. A Parisian wearing a plastic bag over their head to protect themselves from potential coronavirus spread. Photo: AFP

Experts now believe that the virus could be spread through 'aerosol transmission' or through exhaled breath, rather than only through coughing as was initially believed.

It's also become apparent that there are more asymptomatic carriers than previously believed. Face masks in general don't protect you from catching the virus, but they can help people who already have it to avoid spreading it.

On Friday, France made a U-turn when Director General of Health Jérôme Salomon for the first time said  “We encourage the general public, if they so wish, to wear (…) these alternative masks which are being produced.”

READ ALSO: How countries have shifted their advice to the public

As the official health advice shifted, it's likely that more mayors will announce local decrees on face masks in the coming days.

Paris: 'Everyone should wear protection'

Paris Mayor Anne Hidalgo on Tuesday morning told France Info that she was prepared to “go in the same direction” as the other cities that had made masks mandatory.

“Everyone should have some kind of protection, and some kind of scarf of mask is better than nothing,” Hidalgo said.

The mayor's office would ensure that “two million cloth masks” be produced for the capital's inhabitants “in the coming days,” by “a network of small businesses,” according to the mayor.

How will they get the masks?

Nice is the fifth largest city of France with some 340,000 inhabitants. Getting hold on enough masks for everyone and then distribute them to everyone will be a major logistical challenge under the current lockdown.

Cannes has launched a local production and had 500 masks delivered to the local maire (city hall) on Monday. The city counts about 74,000 inhabitants.

“Our objective is to produce at least as many cloth masks, and then surpass this number,” maire representative Thierry Migoule told France Bleu.

Cannes' masks are of the brand AFNOR S76-001, which – although they offer less advanced protection than the surgical FFP2 masks – are approved by key health institutions.

“We're not kidding around,” Migoule said.

The City of Cannes has also bought 3D printers to fabric protective glasses for exposed workers.

Mayor Estrosi justified the coming rules on masks with what he called an “inadmissible relaxation of the population’s behaviour” over the weekend.

Health workers this week expressed worry about the general population taking the lockdown less seriously after what they believed were too many people outside to enjoy the sunny weather over the weekend.

Estrosi also said outdoor physical exercise would be banned outside two time intervals, between 6am and noon and 6pm and 8pm.

Nice is also one of the cities that have introduced a nightly curfew.

Follow all out latest coronavirus coverage in France here.