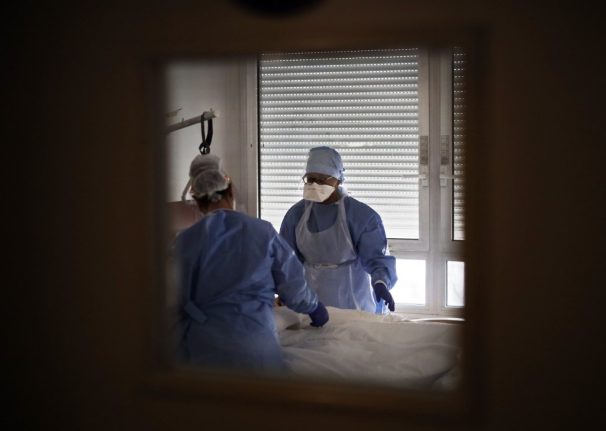 A total of 10,328 coronavirus deaths have been recorded in France since the epidemic began – 7,091 of them deaths in hospital and another 3,237 in the country's Ehpad nursing homes for the elderly.

The total for the number of coronavirus victims in nursing homes has risen sharply from the 2,417 reported on Monday.

Salomon warned “the epidemic is continuing its progression.”

“We are in the ascending phase of the epidemic, even if it is slowing a bit,” he said, adding “we have not yet reached the peak.”

The number of deaths in France appears to have shot up in recent days, but this is partly due to the fact that data on deaths in nursing homes has only become available in the last week, previously the death toll was made up entirely of people who had died in hospital. Tuesday's daily hospital death toll of 607 almost the same as the 605 deaths reported on Monday but up on 441 and 357 reported on Saturday and Sunday respectively, leading to suggestions that deaths over the weekend had been under reported.

There was some positive news on the number of people in intensive care – which Salomon and other health experts have said is the key figure to watch – at 7,131 which represents an increase of just 59 from Monday.

That reflected the smallest jump in intensive care admissions since the lockdown began on March 17th and followed a trend in recent days of a slowing in the growth of patients in intensive care.

At the beginning of April the number of patients in intensive care was rising by several hundred each day.

While the elderly and people with underlying health conditions have always been considered at risk Salomon in his briefing also mentioned another risk factor: overweight people.

“There is indeed very often a risk factor between being overweight and the occurrence of severe forms of the virus,” he confirmed. “We must be careful that overweight people report a deterioration in their physical condition.”

He took the opportunity of Tuesday being World Health Day to pay tribute to France's healthcare workers, many of whom are working in difficult conditions as hospitals in certain areas struggle to cope with the number of patients.

A major evacuation operation is going on, both in military helicopters and specially adapted trains, to take patients out of the worst hit areas including Paris and eastern France to hospitals that have seen fewer cases.

Among the worst hit départements is Seine-Saint-Denis on the outskirts of Paris, where president Emmanuel Macron visited on Tuesday.

After speaking to healthcare workers he chatted to locals who were out on their balconies, and thanked them for staying indoors.

It is now three weeks since France began its strict lockdown aimed at stopping the spread of the virus, but experts say it is too early to say whether cases of the virus have begun to slow, or when they might peak.

The lockdown “is difficult for many French people, I am fully aware of this. But it is essential if we do not wish to find ourselves in an even worse situation than the one we are experiencing today,” he said.

France's health minister Olivier Véran said: “We are convinced that the lockdown is saving lives.”

Already tight regulations on daily life were tightening further on Tuesday with a ban on daytime jogging in Paris, a plan to make wearing face masks compulsory in some areas and the introduction of a travel certificate that is compulsory for anyone wanting to enter France.

In the north of France, the mayor of Marcq-en-Baroeul has made spitting in public, coughing or sneezing without covering one's face, and throwing used masks and gloves in the street punishable by a fine of 68 euros.

But France's Human Rights League said Tuesday it would take the mayor to court for what it considered a violation of fundamental human liberties.

And the Atlantic coastal resort city of Biarritz on Tuesday overturned a two-minute limit it had set for people to spend on public benches after widespread criticism.