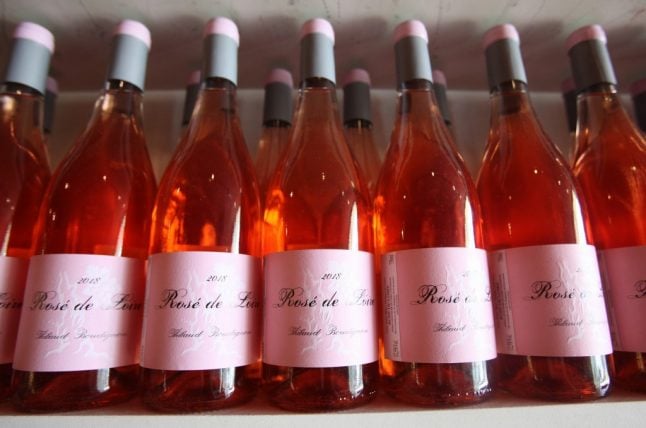 Sun's out, rosé is out. Photo: AFP

Sales of alcohol overall fell by 16 percent in the first two weeks of the strict new rules, figures from sales body Neilson show – despite the closure of the country's cafés and bars.

Between 13th and 29th – the four days before lockdown and 13 days afterwards – the sale of total consumer goods in France rose by 26 percent compared to the same period in 2019.

Many people stocked up in the days before the lockdown was imposed – although there was much less of the panic buying seen in the UK and Australia.

But it seems that alcohol was not on people's shopping lists and even the growing popularity of apéro Sykpe – online drinks with friends – doesn't seem to have picked up sales of alcohol in supermarkets.

Sales of rosé wine lifted by 3.2 percent – probably due to the pleasant warm weather – and beer by 6.9 percent.

But most other types of alcohol sales fell with champagne suffering the worst fall of 52.5 percent as people probably felt there was little to celebrate.

Sales at France's tabacs also rose – by up to 30 percent in some cases – although experts say that is in part accounted for by people no longer being able to travel over the border and get cheaper cigarettes (not that it stopped this man from trying).

Jacques Lebel, general manager for France of Ab InBev brewery told French media: “Beer has suffered less than other alcohols, but we are on a very low growth rate and not accelerating compared to the historical trends of recent years.”

Grocery stores and supermarkets remain open in France and there are no restrictions on buying alcohol to drink at home – despite one French local authority's attempt to ban the sale of all alcohol. They have now rowed back on this plan.