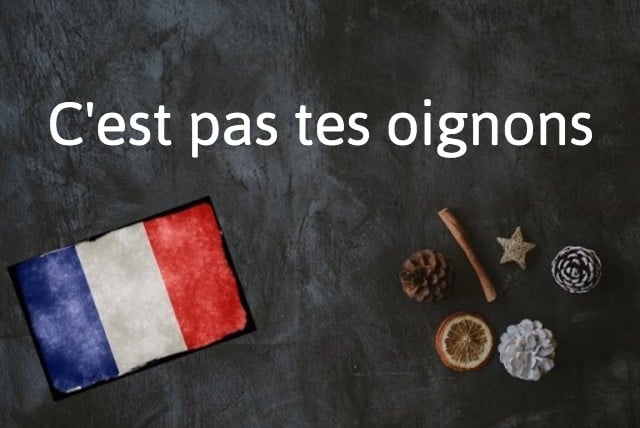 Why do I need to know c'est pas tes oignons?

If you're got a friend, neighbour or colleague who just won't butt out then you may need this.

Its literal translation is 'it's not your onions' but its actual meaning is to tell someone that it's none of their business.

It's a slangy phrase so maybe a better translation would be something like 'mind your own' 'get your nose out' or  'it's none of your beeswax'.

Que contenait ce colis d'Ann Summers qui vous a été livré? C'est pas tes oignons – What was in that Ann Summers package that was delivered for you? None of your business.

That said there's nothing intrinsically offensive about the phrase and you could happily say it in front of grandmas, priests and small children.

Which is somewhat surprising when you consider its origins.

The French online dictionary l'Internaute explains that in the 19th century oigne was a slang term for buttocks, so telling someone to mind their onions is in fact telling them to take care of their own ass.

The slightly more family-friendly alternative is that in certain regions of central France, women of certain means were allowed to cultivate their own corner of the garden and grow onions, which they would sell at the market to earn some extra cash. So telling someone to 'mind their onions' is the equivalent of telling them to tend to their own affairs.