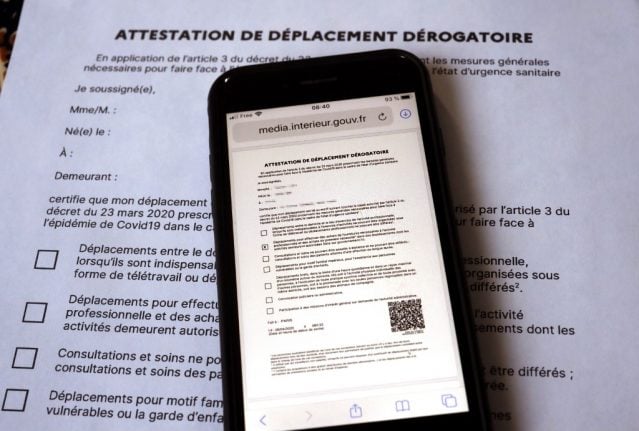 The new smartphone version of the "attestation". AFP

The new form was made available from 8am on the website of the ministry of interior and appears very user-friendly, which will be a relief to those confined to their homes in France.

Until now, the attestation de déplacement dérogatoire, which everyone must carry with them when they leave their home, has only been allowed in paper format.

This has meant members of the public who need to leave their homes to go shopping or for a short jog have needed to either print or write out their permission slip.

But from now on a the form can be filled on your smartphone in just a minute.

Users report that it is quick and simple and there is no need to download any apps or to add a 'digital signature' to the form, as was first suggested when the ministry announced it was releasing a digital version.

The first thing to click on a link to the form, which can be done HERE.

You will then need to fill it out the same way you do with the paper version, which means putting the appropriate information in the boxes: Name, surname, date of birth, place of birth and current address. You then need to tick the appropriate box which applies to your motive for leaving the house for example, to go shopping,  for a doctor's appointment or for exercise.

Then just as the second version of the paper form you will need to put the date and exact time you left the house.

Note that the form automatically generates the current time when you are filling out the form. Once you have filled in the form you simply need to click on the button “Générer mon attestation” (Generate my form).

This will send a PDF version to your phone.

The form will contain a QR code which be scanned by police if they stop you in the street or in your car. The code means the police won't actually need to touch your phone.

Note that police officers will be able to see the time the document last was edited. This is to prevent people from being able to download the form when they realise they are approaching a police check point.

One thing to remember is to have enough battery in your phone to last for the time you are outside the house.

And also remember you need to carry photo ID with you to prove your identity matches that on the form.

On its site the Interior Ministry insists that no personal data will be stored.

“The personal data is exclusively stored on the smartphone, computer or tablet used to generate the form,” the ministry says.

However the ministry warned that the strict rules for leaving the home have not changed with the new form.

“This format is aimed at making it easier to use the form. But it does not change the strict rules of confinement,” said the ministry.

Note that the paper versions of the form will still be valid.

Remember that only the form that is accessible on the government's website will be valid. Any other website publishing similar forms are likely to be scammers trying to steal people's personal data.

For people who are leaving their home for work-related reasons there is a separate from to fill out – justificatif de déplacement professionel, and this one – for the moment – is not available for smartphones.

Neither is there an English language version available currently, as there is for the paper form.

'It's timely with a little leeway'

Interior Minister Christophe Castaner initially said the government intended to keep using the paper version of the permission form because it was “more restrictive” and the measures were “not put in place to facilitate the life of the French who want to go outside as freely as possible.”

“The French have appropriated the rules of lockdown,” Castaner now Le Parisien.

“It's therefore timely to give them a little leeway.”