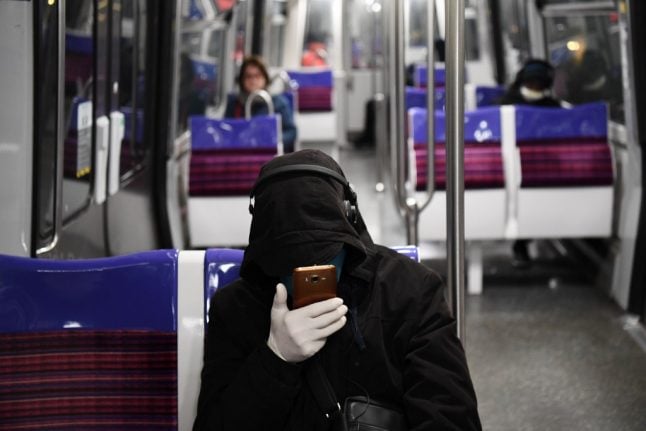 People who used to be crammed in like sardines now give each other a wide berth and there are seats aplenty — passengers sometimes even have whole carriages to themselves.

If it wasn't for the fear of picking up the coronavirus, it would be commuter heaven.

Stations have become surreal time capsules with posters from the world before the virus — adverts for films and theatre shows that have long been cancelled and holidays that will never be taken.

Some trains capable of transporting 600 to 700 passengers were running at rush hour on Friday with hardly 20 people.

The Paris regional transport authority estimate that only 4 percent of the 4.1 million people who usually use it daily took a metro this week.

Line 13, the longest and most crowded on the network is comfortable for once.

“We always get a seat now, but sometimes at rush hour its hard to stay the one metre (yard) apart that you are supposed to,” said Aminata, who works in a supermarket.

So she stays standing looking out of the window with her back to the door just in case.

Even at Saint Lazare station, one of Paris's main railway hubs usually jammed with people from the suburbs and Normandy region, footsteps echo in empty corridors.

Line 1, where tourists on their way to the Louvre museum and the Champs-Elysees usually rub shoulders with bankers and stock brokers heading for the La Defence business district, is eerily empty.

At Chatelet-Les Halles, the biggest underground station in Europe, where five metro lines and three suburban ones converge, one man gets off and two get on. The casts of Greek and Roman statues that decorate the platform at Louvre-Rivoli shine in the dark, while at the next station serving the world's most visited museum itself, two people get off.

Tuileries and its gardens, normally thronged with tourists and Parisian flaneurs, are both closed.

Diane, a 28-year-old physiotherapist, gets on at Nation without gloves or a mask as she heads out into the suburbs to work in a retirement home.

Her boss has given out protective equipment to be used on the job but not while travelling to work. Paris pharmacies have long sold out of masks.

“It doesn't worry me,” she told AFP. “People are being careful, except some young people sometimes, to be a bit rebellious.

“Apart from that, no one goes near each other,” she said, her hands kept firmly in her pockets.

Of the 15 people left on the long train, only three are wearing masks, while another has a scarf wrapped around their face.

Passengers' only real complaint is that there are fewer trains running — 30 percent less or so since France went into lockdown on March 17 — and around 50 smaller stations are closed.

Lest they forget the paranoia of the times we are living through, loudspeakers regularly remind them to keep their distance and wash their hands.

Which has been a real problem for Ibrahim, who has been living rough for six months. The 31-year-old from Senegal manages to get to the Gare du Nord station every day for a shower, however.

And on the plus side, “the police are no longer coming into the metro and at least I'm warm.”

Apart from the occasional scuttling of the mice, there is nothing to disturb him at the Grands Boulevards station, which is as silent these days as the statues in the deserted Musee Grevin wax museum above it.