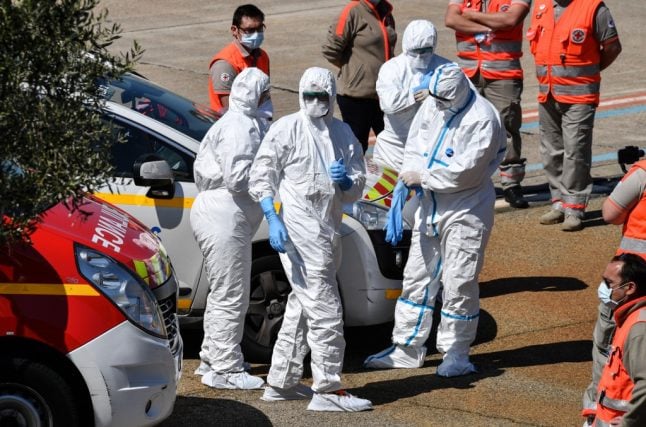 Medical staff prepares for the arrival by helicopter of patients infected with COVID-19 at the Nimes air base, south of France, on April 4, 2020. AFP

The death toll includes a further 441 deaths reported in French hospitals in the last 24 hours – less than the record 588 reported on Friday, as well as several hundred more in France's elderly care homes known as Ehpads.

On Saturday evening French health chief Jérôme Salomon announced that the death toll in nursing homes had risen to 2,028. That number had risen from 1,416 on Friday after additional reports from Ehpad homes across the country.

With 5,532 deaths in hospitals and 2,028 in care homes for the elderly, the overall death toll in France increased by around 1,000 since Friday's reported total.

On Saturday there were 28,143 patients being treated for coronavirus in hospitals across France.

The one positive note was the indication that the number of patients being admitted to intensive care units in French hospitals was slowing.

With 6,838 patients in a serious condition France has never had so many patients in intensive care, said Salomon but he confirmed the numbers were rising by less each day.

The number of patients in intensive care increased by 176 on Saturday, compared to 263 on Friday, 382 on Thursday and 452 on Wednesday.

Some 105 intensive care patients were under the age of 30.

'Stay at home to save lives'

One of the regions which has been hit hard by the epidemic is the greater Paris region of Île-de-France.

Antoine Vieillard-Baron, head of intensive care at the Ambroise-Paré hospital in Paris told BFM TV that the region had seen fewer admissions to intensive care units in the last 24 hours than in previous days.

The regional health authority said the number had risen by 3 percent compared to over 10 percent in recent days.

Some 15,000 patients had also returned home from hospitals across France after recovering from the virus.

Despite the apparent slowing of the rate of intensive care admissions – a key indicator of the progression of the virus according to French health chiefs – Salomon called for “prudence”.

He stressed that the numbers were still rising, albeit at a slower rate. There were signs of hope from neighbouring Italy on Saturday when health chiefs reported that for the first time the number of patients in intensive care actually dropped since the beginning the epidemic.

Salomon said that “now is not the time to let our guard down”.

“I tell you this evening: Stay at home to save lives.”

The health chief added that “France was now entering a period whereby we can assess the impact of confinement.”

“The COVID-19 pandemic is completely unprecedented with thousands of serious cases and thousands of deaths,” Salomon said.