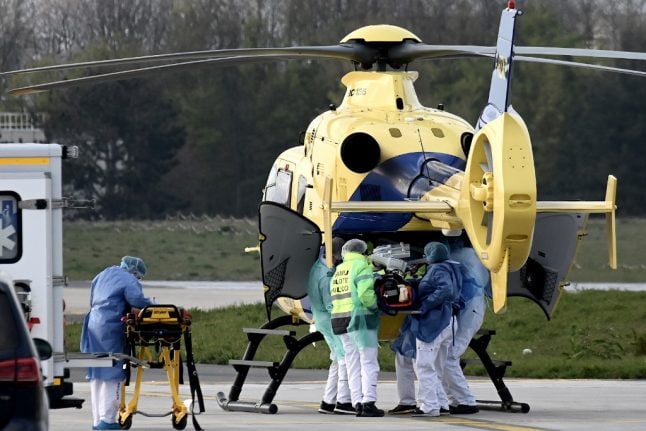 Patients are being airlifted out of the worst affected areas. Photo: AFP

Coronavirus cases in France have so far been heavily concentrated in several regions, where local healthcare facilities are struggling to cope.

Specially converted trains – known as TGV médicalisés – are taking patients from the greater Paris Île-de-France region and the Grand-Est region to places that have fewer cases, such as Brittany, Occitanie and Pays-de-la-Loire.

At the same time the French military are airlifting critical cases from eastern France to hospitals in neighbouring Germany, Switzerland, Luxembourg and Austria, in what Director General of Health Jérôme Salomon referred to as a great example of solidarité européen.

According to figures from the French health ministry, between March 18th and April 2nd, 439 patients have been transferred, all of them critically ill and requiring intensive care.

Here's a look at how the patient transport are working.

This has seen the highest number of transfers so far. The eastern French region was the site of an early coronavirus 'cluster' in Mulhouse, centred around a church in the town, and has seen a very high number of cases.

Hospitals in Mulhouse and nearby Colmar, close to the German border, were the first to become overwhelmed with the number of patients needing intensive care beds, despite the construction of a military hospital in Mulhouse.

Between March 18th and April 2nd, 255 critically ill patients have been transferred out of Grand Est.

Of those, 163 have gone over the French border to Germany, Luxembourg, Switzerland and Austria, the majority of them airlifted by the French military.

The rest have been transferred to other parts of France, some airlifted and some on TGV médicalisés.

In total 54 have gone to Nouvelle Aquitaine, 20 to Pays-de-la-Loire and six each to Brittany, Occitanie and Provence-Alpes-Côte-d'Azur. Medical staff take a patient onto one of the specially converted trains. Photo: AFP

The greater Paris region began by taking the most seriously ill patients from other areas into the capital's specialist hospitals. Bichat, the specialist fever hospital in the 18th arrondissement, now only takes coronavirus patients.

However as time went on the region could no longer cope with the sheer number of seriously ill patients and has begun transferring some out.

Patient transports began on April 1st with two TGV médicalisés taking 48 patients out, and 72 were transported the next day.

The largely rural region of Bourgogne-Franche-Comté in eastern France has also struggled to cope with the number of critically ill patients as the epidemic has progressed.

So far 52 patients have been transferred – 42 to the neighbouring Auvergne-Rhône-Alpes region and 10 sent south to Provence-Alpes-Côte-d'Azur.

Corsica was among the last parts of France to record its first confirmed case of coronavirus, but once the virus arrived it spread rapidly around the island, particularly in the capital Ajaccio, which was declared a cluster zone and closed its schools and markets before nationwide restrictions came in.

Medical facilities on the island have struggled to cope and 12 patients have been evacuated from the island on French Navy medical ships to hospitals in Marseille.