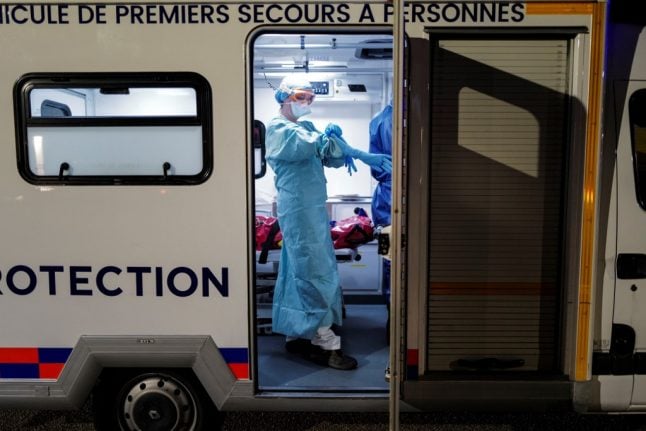 A total of 588 new fatalities in hospitals were recorded in the last 24 hours, said France's Director General of Health Jérôme Salomon on Friday evening – the highest single number of hospital deaths registered since the beginning of the epidemic.

Salomon said the number of people who had died from the coronavirus in the country's elderly care homes (Ehpads) has risen to 1,416 since the beginning of the epidemic. That number has risen from 884 after additional reports from Ehpad homes across the country.

The government has stressed that these numbers only gave a partial picture of the total situation given that nursing homes, particularly in the east of the country, had been hard hit by the outbreak of the virus.

The total number of people in intensive care also increased by 263, from 6,399 on Thursday to 6,662 on Friday. That compares to a rise of 382 in Intensive care admissions from Wednesday to Thursday and a rise of 452 from Tuesday to Wednesday.

The number of patients in intensive care is a key indicator for monitoring the progression of the epidemic curve.

Salomon said that while the number of people in intensive care was still growing day by day, the rate of that growth had slowed down this week.

ANALYSIS: When will the coronavirus epidemic peak in France?

“There has never been so many critically ill people in France at the same time for one illness,” Salomon said.

The large numbers of patients in critical conditions needing intensive care treatment has put massive strain on hospitals, particularly in the worst hit areas in eastern France and the greater Paris Île-de-France region.

At the beginning of the epidemic, France had just 5,000 intensive care beds in total. This has now been increased to 9,000 with a target to increase again to 14,000.

“We have transformed all sectors of the hospital to an intensive care unit,” said Célestin-Alexis Agbessi, a doctor at the Bichat Hospital in the 18th arrondissement in Paris.
Hospital Bichat is one of the French hospitals that has seen its capacities overwhelmed by the surge in new coronavirus patiens.

The government has increased efforts to transfer patients between regions to ease pressure on the hardest hit areas. By Friday, 506 people had been transferred to less affected areas in the country and abroad.

IN NUMBERS: The mass evacuation of coronavirus patients from France's overwhelmed hospitals

A total of 27,432 people were hospitalised for the coronavirus on Friday, Salomon said – up from 26,246 on Thursday.

“Stay at home if you want to save lives,” Salomon reiterated, as the government on Friday had reminded the country's inhabitants that extra police roadblocks would be set up to prevent people going on planned Easter trips.