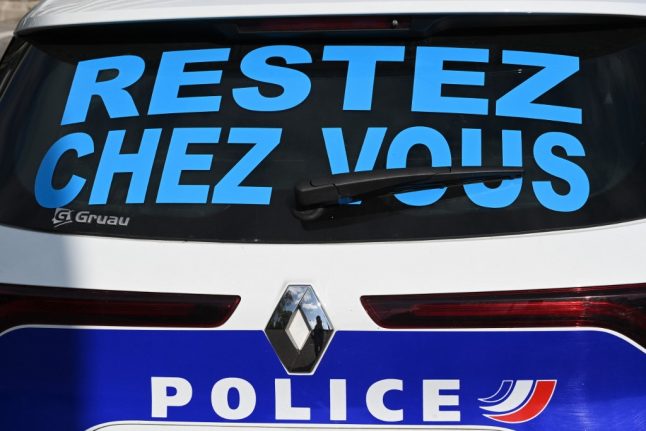 At present France is on strict lockdown until April 15th, with all non-essential trips outside the home banned and everyone required to have a signed, timed and dated permission form every time they step outside.

But what happens after that?

Well if anyone has planned a party for April 16th they would do well to cancel it.

France's lockdown began on March 17th, initially for two weeks although the government quickly made it clear that this was likely to be extended.

Sure enough, it was then extended by another two weeks until April 15th, but again this date is likely to be pushed back.

The Scientific Council set up to advise the government on its coronavirus management has suggested a six week lockdown, which takes us to the end of April.

Whenever the lockdown does end, it is likely to be less a mass release and giant party than a gradual easing of restrictions, said France's Prime Minister Edouard Philippe.

“It is likely that we are not moving towards an end of confinement that would be in one move, everywhere and for everyone” the PM declared during his hearing with the National Assembly on Wednesday.

This is uncharted territory for France.

“Finding the right deconfinement strategy won’t be easy,” agreed Daniel Camus, a professor at the Pasteur Institute in Lille.

“Ideally we would let everyone who has already had the virus out first, but that would require a massive testing of the entire population in a very short time.”

Several working groups – including the Scientific Council – have been set up to look at this issue, but at present the emphasis is on a gradual loosening of restrictions over several months. The pressure on hospitals will have to ease considerably before lockdown rules are loosened. Photo: AFP

The question of when is largely dictated by the situation in France's hospitals.

The Scientific Council has previously stated that no lifting of restrictions should be even considered until the epidemic has peaked, death tolls are significantly down and the pressure on hospitals, in particular on their intensive care units, has eased.

Exactly when the peak will occur is very difficult to predict.

At present the number of deaths in France is increasing every day, but several experts say they hope that we will start to see a reduction by the end of this week.

READ ALSO ANALYSIS When will the coronavirus epidemic peak in France?

The Chinese city of Wuhan, the epicentre of the outbreak which has been in lockdown since January 23rd, is set to lift its lockdown on April 8th. Working from home is likely to remain the norm for the foreseeable future. Photo: AFP

The question of how restrictions will be eased is currently being debated, but some of the things suggested include regional measures, work types, vulnerability of patients and mass screening.

Restrictions were originally brought in on a regional basis, with areas that had a lot of cases closing their schools and markets earlier than the rest of the country, and it is likely that restrictions will be loosened in the same way.

Professions might prove crucial and it is likely that people who can work from home will be asked to continue doing so for the foreseeable future.

The elderly and people with underlying illnesses are likely to be advised to self isolate for longer and hygiene measures such as washing hands frequently and social distancing are likely to continue for some months yet.

“It is a logical strategy, but very complicated to do in practice,” Camus said, using the example of the Grand Est – the northeastern region in France that the coronavirus hit the hardest and earliest.

“Even there, a large part of the population will not yet be immune to the virus,” he said. “We cannot tell them to go out on the street and expose themselves to the risk of being contaminated.”

“People would say, ‘I don’t want to be sent off to the slaughterhouse like that’, they wouldn’t listen to that kind of strategy.”

Then there is the option of selecting groups of the population depending on factors like their profession or age.

Camus said this “could be a solution,” but that the problem was that “the more time that passes, the bigger the group of key professions grows.”

Selecting what groups should be let out first and finding the means to test all of them would be a big challenge, according to the professor.

“It’s a very complex issue and there is no ideal solution,” Camus said.

Jérôme Salomon, France's Director General of Health, has stressed that large gatherings should be the last thing to resume, and many large sporting events scheduled for June and July have already been cancelled.

Health chief Salomon added: “The French people have understood that confinement will not be abruptly ended” with a return to how things were before.
“There is no miracle solution,” he added. Widespread screening of the population will be crucial to end lockdown safely, in particular to identify asymptomatic carriers of the virus who can infect others.

Until now France has only been testing certain groups including healthcare workers and people with severe symptoms.

It has ramped up testing this week, and is now testing about 20,000 people a day, but this needs to be increased further.

Health minister Olivier Véran says the target is for 50,000 a day by the end of April and 100,000 a day – approaching the level needed to count as widespread screening – by the end of June.

The president of the Scientific Council, Jean-François Delfraissy, said the council has been in touch with experts in South Korea, the country widely regarded as having the most effective mass testing programme in the world.

This is the great fear of all governments, that once restrictions are loosened the virus will come back, worse than before.

This is why testing is crucial to determine not just who currently has the virus, but who has already had it and is therefore immune.

The fact the coronavirus sometimes produces mild symptoms or in some cases no symptoms at all means that many people will have already had it without realising.

“If the rate of immunised French people is too low, the virus could restart,” Olivier Véran warned.