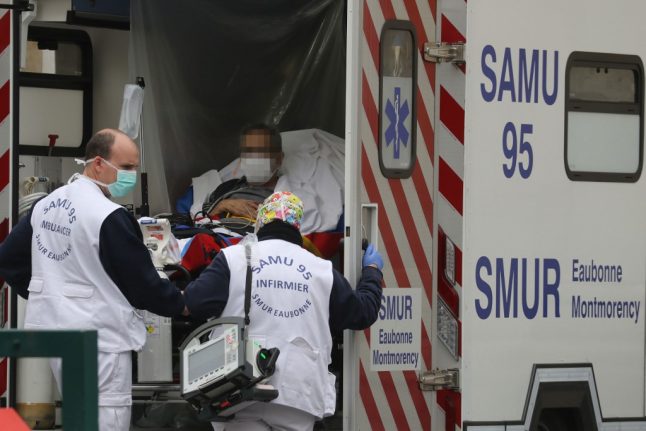 France's previous daily coronavirus death tolls had included only those who had died in hospitals, but it was known that the nursing homes, particularly in the east of the country, had been hard hit by the outbreak of the virus.

Salomon announced on Thursday night that at least 884 people had died in Ehpads around the country, while stressing that this is only an initial figure. Separately Salomon reported that in the last 24 hours 471 coronavirus patients have died in hospitals, taking France's total number of hospital deaths so far to 4,503.

But the health chief stressed that the most important number to look at for predicting the direction of the epidemic is the number of people currently in intensive care units, saying “this is the major indicator of the future course of the virus”.

The huge numbers of patients in critical conditions needing intensive care treatment has put massive strain on hospitals, particularly in the worst hit areas in eastern France and the greater Paris Île-de-France region.

At the beginning of the epidemic, France had just 5,000 intensive care beds in total. This has now been increased to 9,000 with a target to increase again to 14,000.

The operation to evacuate patients from overwhelmed hospitals continued, with the French military airlifting patients to Germany, Luxembourg, Switzerland and Austria. In total 163 patients from France have been transferred to hospitals in neighbouring countries.

Specially adapted TGV trains are also being used to take patients out of overwhelmed Paris hospitals to Brittany, Occitanie and Centre-Val-de-Loire regions, which have fewer cases.

Despite this, the Paris police chief on Thursday confirmed that police have requisitioned part of the Rungis food market on the outskirts of Paris to store bodies as local funeral homes also struggle to cope.

Around a third of all coronavirus deaths have happened in the greater Paris area, although this includes patients from other areas transferred to the specialist hospitals in the capital.

The death toll on Thursday was slightly lower than the 509 people who lost their lives on Wednesday, although Salomon cautioned that it was too early to say if this was a trend.

“I would be very careful, there is an incubation phase of a week and delay in severe cases appearing,” he said.

“The evaluation of the impact of the confinement can take place at the end of the week or over the weekend. We should start to have an impact on admissions to hospital and intensive care in particular.”

“When we have the good news from the ground so much the better. But let's be careful,” he said.

France's prime Minister Edouard Philippe has predicted that this week would be “extremely difficult” but after that the government hopes that the effects of France's struct lockdown measures, which began on March 17th, will begin to be felt.