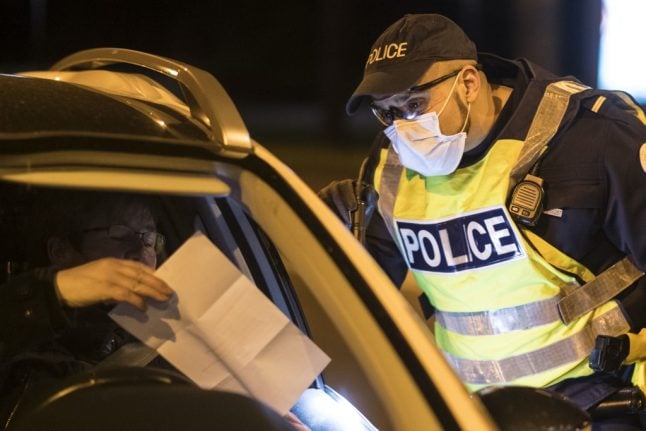 France's lockdown rules are among the strictest in Europe – people are only allowed out of their homes for absolutely essential trips and everyone needs a signed, dated and timed form every time they step out.

And as the empty streets and clear skies (with no traffic pollution) show, most people are obeying the rules and staying home. You can be fined or even in extreme cases, jailed for breaking lockdown rules. Photo: AFP

But for those who don't, there are steep fines and a last resort of jail.

The first time you are caught either without a form or outside for a non-essential reason you face a fine of €135 (raised from €38 on the very first day of lockdown).

A second offence within 15 days earns you a €200 fine, but if you breach the rules four or more times during a 30 day period that's when it starts to get serious.

A fourth breach can earn you a fine of €3,750 and a maximum of six months in jail.

Police have issued more than 350,000 fines since the lockdown began on March 17th, but when it comes to actually jailing people it seems the powers are being used a little more sparingly.

At least two people have been jailed, however, a 35-year-old man from Cavaillon, near Marseille, was jailed for two months and fined €800 after being caught outside without a certificate four times in less than a week.

He was also found to be driving an uninsured car and told officers he “didn't agree with the new rules”, according to radio station France Bleu.

A 20-year-old man in Calais was also jailed for two months after he was caught outside without a form a total of eight times.

Paris saw its first lockdown-related court appearance on Tuesday, when a 22-year-old man named in French media as Mimoun K was charged with five separate breaches of the lockdown rules.

He was spared jail, but ordered to complete 105 hours of community service, preferably in the healthcare sector, once the lockdown rules are lifted. If he fails to comply he will be jailed for two months.

Meanwhile in Grenoble a habitual lockdown offender was sentenced to the rather ironic punishment of house arrest.

The 20-year-old man, who had breached the rules on four occasions, was sentenced to two months of house arrest with an electronic tag.

However the judge specified that the house arrest will only begin once the lockdown has ended and everyone else is allowed out again as normal.

“He will be on lockdown in some way after the lockdown ends,” the public prosecutor in Grenoble, Eric Vaillant, told AFP.

READ ALSO Can I contest the fine for breaking lockdown rules in France?