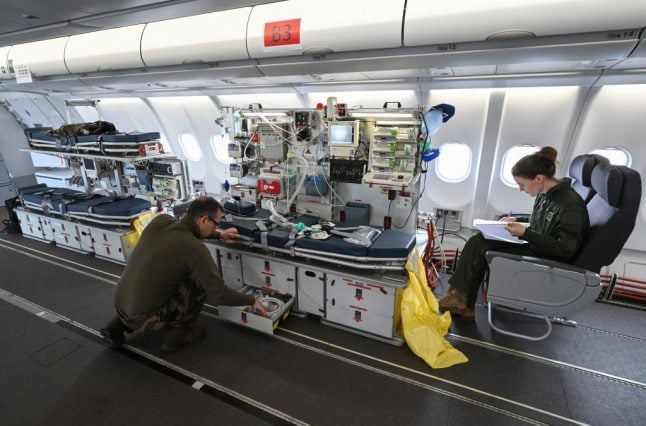 The French military have been airlifting patients to hospitals abroad. Photo: AFP

In the last 24 hours 499 coronavirus patients have died in hospital in France – the death toll does not include those who died at home or in retirement homes, so the real total is likely to be even higher.

The numbers represent a big jump from the 418 people who died on Monday and the 365 who died on Friday.

Also on Tuesday another 458 people were admitted to intensive care, meaning more than 5,500 coronavirus patients were in a serious condition in French hospitals.

READ ALSO ANALYSIS When will coronavirus cases peak in France? It brings the total number of people who have died of coronavirus in France to 3,523, while 9,444 people are recorded to have recovered.

The numbers were revealed by Director General of Health Jérôme Salomon in his daily briefing, where he also confirmed that the evacuation of patients from certain areas was being stepped up as hospitals struggle to cope.

“This situation is completely unprecedented in the history of French medicine,” said Salomon.

France is still behind the curve of deaths on Italy/Spain but only just. Likely to see very high death rate until the end of the week, health officials suggest. The two weeks old lockdown should begin to flatten the curve of new serious cases by the weekend. In theory…

Cases in France have so far been concentrated in the east of the country, where the first 'clusters' of cases were seen, and the greater Paris Île-de-France region.

Hospitals in both areas are under severe pressure and struggling to cope with the number of cases.

Salomon said that patients from eastern France were being airlifted out to hospitals in other parts of France and to other countries – Germany, Switzerland and Luxembourg have all taken French patients.

Specially fitted out medical trains have also been employed to take patients to other parts of France.

And now patients are also being evacuated from Paris by train.

Salomon confirmed that two medical trains will leave Paris tomorrow, bound for Brittany, where there have been fewer cases and hospitals have more capacity.

The Local on Friday spoke to a doctor at Paris' specialist fever hospital Bichat, which now takes only coronavirus patients, and he described a system at breaking point.

Célestin-Alexis Agbessi said: “We are starting to lack beds across the entire (Paris) region.”

Prime Minister Edouard Philippe warned over the weekend that the most difficult days are ahead. Experts predict that the situation will get more difficult this week after which, they hope, the effects of France's strict lockdown will be seen and the numbers will start to fall.

But Dr Agbessi told The Local: “If the epidemic follows a growth pattern comparable to what we have seen in Italy and China, it's clear that we're only at the beginning.

”This is not a wave,” he stressed. “A wave hits you and leaves. This is a flood – the water is slowly rising, filling all the rooms until there's nowhere to escape.”

Health authorities in the Île-de-Paris region have been so desperate that in recent days they have appealed to veterinary centres to loan vital medical equipment such as ventilators.