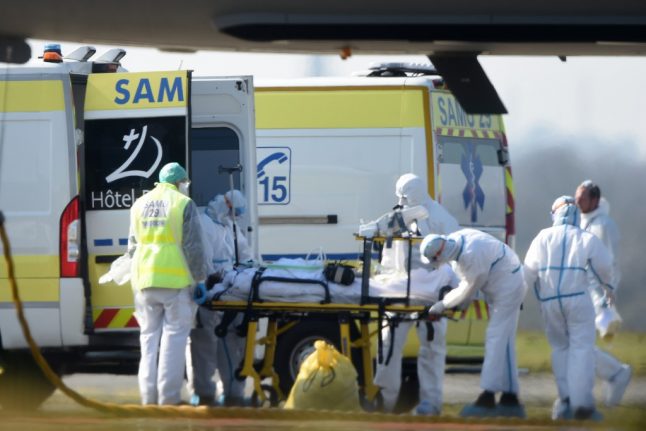 France, Spain and Italy are the hardest hit countries in Europe so far. Photo: AFP

The latest statistics on recovery rates, intensive care admissions and death rates from these countries is providing a small gleam of hope in what remains a very serious situation.

All three countries are still reporting hundreds of deaths every day, and each have imposed strict lockdown measures on their populations, which are likely to continue for weeks if not months. France, Italy and Spain have all imposed strict lockdown measures in an attempt to contain the spread of the virus. Photo: AFP

Health systems in all three countries are struggling with the sheer number of cases of coronavirus and medics have reported extremely difficult situations in which they are forced to make heartbreaking decisions.

But while no-one is suggesting we get complacent about the sheer scale of the challenge facing all three governments, scientists say there is some emerging data that gives them cause for cautious optimism.

The question everyone is asking is 'when will this peak and then start to get better' but the one thing that virtually all medical and scientific experts agree on is that this is impossible to predict with any kind of accuracy.

Italian epidemiologist Pierluigi Lopalco has been widely quoted as saying that predicting any further than three days ahead “would involve relying on a crystal ball”.

Italy reported more than 800 deaths on Monday, and while this figure is shockingly high, it is still down from the 969 deaths recorded on Friday.

Italian health authorities have urged caution and said it is too early to declare a trend, but there is some hope that the numbers will continue to slow.

In France and Spain numbers are still rising every day, and these countries are generally estimated to be between one week and 10 days behind Italy in the progress of the epidemic. Emergency departments in Spain are under severe pressure. Photo: AFP

Experts say this is the crucial number to watch with France's Director General of Health Jérôme Salomon saying this is “the most important number to give an indicator of coming days”.

Coronavirus patients display a wide range in the severity of their symptoms – for around 80 percent of people the symptoms are relatively mild and do not require hospital treatment. However around 15 percent develop pneumonia type symptoms and breathing difficulties, while five percent develop very severe symptoms – often but not always patients who are elderly and have underlying health conditions.

The number of people who need intensive care treatment and ventilators is putting a severe strain on health services in all three countries.

Of the people who need intensive care treatment, the average patient is there for 14 to 21 days before they either recover or die – therefore the number of intensive care patients provides a crucial indicator of the likely death rate for the coming days.

It is also the number that public health bosses are looking at anxiously to see if they have the facilities they need for such critically ill patients.

And in all three countries, the number of new patients being admitted to hospital per day is slowing, with the trend particularly marked in Italy. Despite the overall trend there are still concerns for medical facilities where a lot of cases are concentrated, especially as more cases are reported in southern Italy which in general has fewer facilities than in the north.

In France patients have been airlifted or shipped by special trains out of the worst affected regions in the east of the country. An exhausted medic takes a break in a Paris hospital. Photo:AFP

While deaths naturally grab the headlines, it remains the case that the majority of people admitted to hospital with coronavirus will recover and go home.

Calculating recovery rates is tricky because, as with the death rate, there is a time lag. So the people leaving hospital now will have been infected two to three weeks ago – before lockdown measures began in France and Spain.

Calculating them as a percentage of the total number of cases is even more problematic because countries have very different testing policies and pretty much the only constant is that the officially confirmed cases are just a fraction of the number of people who actually have the virus.

Nevertheless, the numbers of patients recovering from coronavirus are encouraging.

On Monday the French public health body listed 792 patients who has recovered and been sent home, set against 424 who had need ventilating that day.

In Italy on Monday 1,590 people recovered – the largest number of recoveries in a single day since the outbreak began.

Italy has also seen a marked slowdown of new cases reported in recent days, with Monday's new cases around 1,000 lower than the new cases over the weekend.