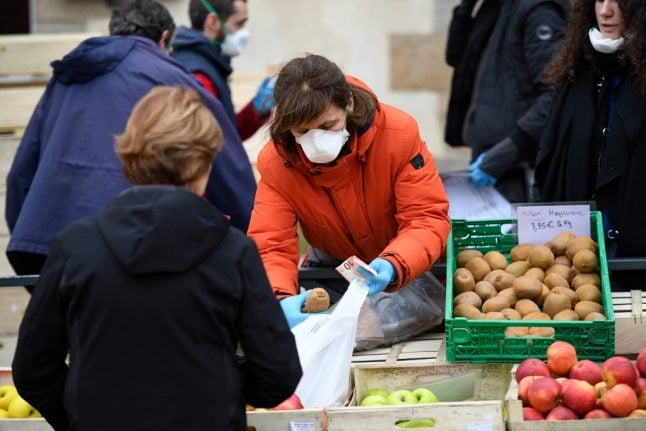 The food markets in France that have been granted an exemption from the ban on their activity during the coronavirus lockdown must comply with strict health regulations. Photo: AFP

Most of the markets are small-scale situated in rural areas and towns with less than 2,500 inhabitants, according to the French national federation of markets and the Agricultural Ministry.

But cities like Lille, Grenoble, Rennes were also on the list of areas that were allowed to reopen food markets, in an agreement negotiated between unions and the French agricultural and interior ministries, announced on Tuesday.

Paris did not feature on the list of areas granted an exemption from the government's coronavirus lockdown rules. Nor did its suburbs Seine-Saint-Denis and Hauts-de-Seine.

While the markets would be able to go back into business as soon as this week, they would need to comply with strict health regulations.

Mairies (town/city halls) would need to organise for customers to line up outside the exit of the market and that only one person would be allowed at each booth at the time.

Booths must be spaced out and shoppers must respect rules of social distancing by keeping one metre between them.

Entries and exits must provide hand sanitising gel dispensers and sellers must wast their hands between each customer.

No cash would be allowed and everyone would need to pay by contactless card (sans contact) payment. Food sellers will have to wash their hands between each customer following the new rules on French food markets. Photo: AFP

French Prime Minister Edouard Philippe on March 24th ordered all of France's 10,000 markets to close down in a tightening of the rules on commercial activities during the coronavirus lockdown.

The ban followed several media reports of crowds of shoppers breaking with the strict rules of social distancing to limit the spread of the coronavirus in the country. Some rural areas in France depend on their food markets for fresh products. Photo: AFP

Exemptions could be granted to municipalities where markets fill an essential role, the PM said – providing that they gathered less than 100 people.

“In some towns, the market is the only way to get access to French products,” Philippe said, adding that local authorities would be better suited than the government to decide the necessity of the markets in their areas.

The ban caused disarray among French food producers of products such as cheese, fish and vegetables as they had already lost out financially on the closing down of restaurants and cafeterias in the country.