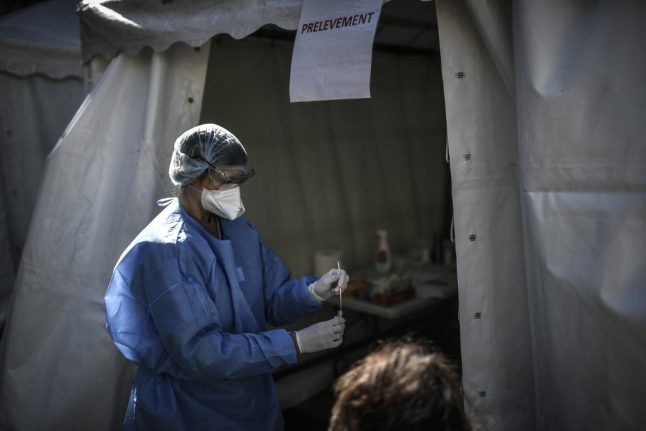 There are now 20,946 people hospitalised in France with COVID-19, with 5,107 of them in intensive care, the government said in its daily update.

French health chief Jérôme Salomon said the number of coronavirus patients in intensive care had risen by 424 in the last 24 hours, a bigger rise than on Sunday when another 350 patients were admitted to intensive care.

Of over 5,000 intensive care patients, 34 percent were aged below 60. Sixty-four of them were younger than 30 years old.

Salomon said 'the number of people in intensive care is the most important” indicator of the epidemic development.

The French death toll includes only those who died in hospital and not those who died at home or in old people's homes, and the total contamination rate only includes those who have been tested.

In recent days authorities have warned that the situation will worsen in the Paris region of Île-de-France, where 954 people have now died, an additional 147 since Sunday.

The map below shows up to date numbers for the number of people in intensive care (réanimation) in hospitals around France.

READ ALSO: In Maps: How the coronavirus epidemic has hit different parts of France

As hospitals are becoming increasingly strained, France is anxiously awaiting the coronavirus epidemic to reach its peak and the growth in the number of new cases and patients to slow down.

“We are starting to lack beds across the entire (Paris) region,” said Célestin-Alexis Agbessi, a doctor at the Bichat Hospital in the 18th arrondissement in Paris. “We have transformed all sectors of the hospital to an intensive care unit.”

READ ALSO: When will the coronavirus epidemic peak in France?

Salomon noted that the growth in infections in neighbouring Italy had seen a “relative slowing” in the last days and expressed hope that the figures in France could show signs of improvement at the end of this week.

“Starting this week we should see a decrease in the number of new intensive care patients,” Salomon said.

Currently, the total number of intensive care patients in France outnumbered the number of available beds.