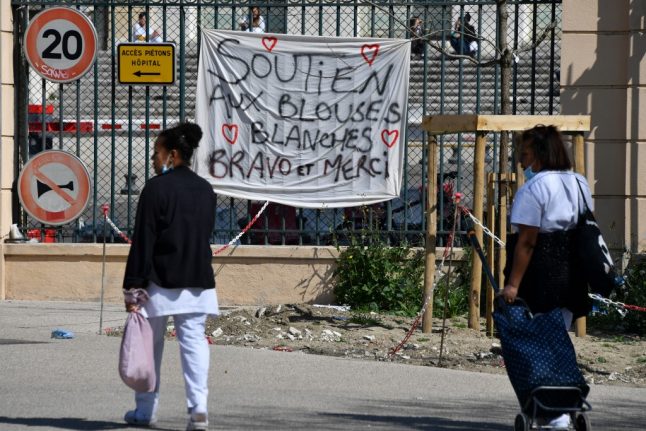 The banner reads "support for the white blouses (hospital staff), well done and thank you", but not everyone in France is being supportive towards the country's healthcare workers. Photo: AFP

Some have been told to leave their homes or worse, even as the country turns out nightly at 8:00 pm to applaud those on the front lines of the coronavirus fight.

Prime Minister Edouard Philippe denounced Sunday the “scandalous words” aimed at some caregivers, many of which have been posted on social media.

For Lucille, a nurse in Vulaines-sur-Seine southeast of Paris, the message came in an unsigned letter found in her mailbox last week, telling her to do her shopping outside the town and stop walking her dog.

“I'm furious,” said Lucille, who like several others asked not to be identified by her family name. “We're already putting our lives on hold to help others, and here we're being treated like lepers.”

“Whoever wrote this surely doesn't take all the precautions I do,” she added, pointing out that her hands were being “destroyed” by constant washings.

“I try not to let it get to me, but it's easier said than done.”

She turned the letter over to the mayor, who alerted prosecutors who have opened an inquiry.

“Even if these types of incidents are still rare, it's shocking,” said Patrick Chamboredon, president of the national council for France's 700,000 nurses.

Thomas Demonchaux, a nurse in northern France, noted “the suspicions of some of my neighbours,” who try to figure out if they should be keeping their distance.

“They ask if I've been in contact with Covid-19 patients, tested or not, or if I'm tired,” he said.

For Negete Bensaid, a nurse in Paris, contagion fears have prompted some patients to refuse her visits, and even some in her family have urged her to stop working.

“People steer clear when they see me coming — they don't stay just one metre away, but four metres!” she said.

Beyond the weight of the wariness, whether justified or not, nurses who make house calls have also been targeted by thieves hoping to get their hands on face masks or sanitising hand gel.

In the western coastal city of La Rochelle, Claire's nursing practice was robbed last week of around 30 surgical masks she had just received.

“I was incredibly angry, but also frightened, it just seemed unreal,” she said.

Since then, “I take off my nursing badge and don't leave anything in the car, it's become a routine, just like I always put on a mask and wash my hands to protect my patients.”

Sophie, a nurse in Marseille, also said she “couldn't believe it” when her car was broken into, the thieves taking her badge as well as masks and other protective material.

“We're going to end up being assaulted,” she said, adding that some patients were even demanding that she buy groceries for them, so that their children avoid any virus exposure.

“It just feels like there's a lack of respect. So I don't even go out at night any more to listen to the applause.”