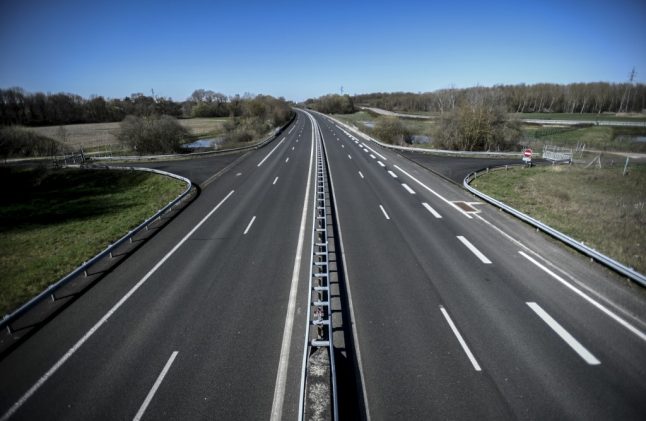 A picture taken on March 23, 2020 at Isle-Aumont in Aube department shows the deserted A5 highway. Photo: AFP

What do French authorities say about going to second homes?

At the beginning of the lockdown on March 17th the government said people would be allowed to travel to the second homes, as thousands have done, for the lockdown period.

But the ministry of interior has now toughened up its stance. In a statement to The Local the government now makes it clear to British owners of second homes in France and indeed those in France  that they should not be changing the place of residence during lockdown.

“People, French and British alike, are not allowed to travel to their second home until the end of confinement,” read the short but concise statement.

Anyone wishing to enter France from another country now needs an attestation de déplacement internationale which lists the acceptable reasons for travel into France. Visiting a second home is not one of them.

Answering the question “Can I go on holiday” the ministry makes it clear that “going on holiday or going to your second home or a rental home are not part of the authorised trips.”

The message from the British Embassy in Paris to The Local on Thursday March 26th was also pretty clear and carried a warning for those thinking of travelling.

“We are currently strongly advising against all non-essential travel,” the spokesperson said.

“If UK nationals are primarily resident in the UK then they should avoid travelling to France as travel options are rapidly reducing.”

Brittany Ferries has suspended all passenger services and most other operators are running much reduced services.

And it wasn't just travel options that second home owners needed to consider during the coronavirus pandemic.

“They should also consider checking with their insurance provider to see what kinds of treatment are covered if they are not registered in the French healthcare system,” the spokesperson said.

Brits for whom France is their country of residence and who are returning home after period in the UK or elsewhere can do so. Travel of all kinds is heavily restricted in France. Photo: AFP

Last month, France's foreign minister Jean-Yves Le Drian had a telephone call with his British counterpart Dominic Raab to discuss travel between the two countries, which now both have lockdowns in place.

They agreed that the border between France and the UK would remain open while both countries are on lockdown, in order that border restrictions;

'Over a million leave Paris'
It appears that many French, particularly those in the Paris region, have been ignoring the orders.

A study by phone giant Orange, using clients mobile data, suggested one million people have left the Paris region before and after the lockdown began.

According to the local authority chief in the coastal département of Vendée in the west people are still turning up at second homes in their droves and they are coming from abroad as well as France, notably Switzerland.

Those heading to their countryside residences have not necessarily been welcomed warmly.

Authorities have been forced to take action to close beaches, cycle trails and hiking trails. Several islands off the coast of France have also cancelled ferry links to prevent people reaching second or holiday homes.

There have also been reports of second homeowners receiving a frosty welcome from the locals.

Lockdown rules and returning home to the UK

France itself has extensive lockdown measures in place, more strict than the UK's measures at this stage.

Anyone who wants to make any kind of journey in France, whether it is from their home to the local baker's to buy a baguette or from the ferry port to a country property – needs to fill out this form before they travel.

The form states the acceptable reasons for travel in France, and there are not many of them.

READ ALSO France's lockdown – what should tourists do? Police can and will check your papers whenever you are out of the home. Photo: AFP

Family visits are only permitted if they are defined as vital, for example providing urgent care to someone who is sick. Simply visiting to check up on relatives does not count as an urgent reason and the government has urged people not to visit anyone over 70 – the most vulnerable group.

While it goes against the grain to stay away from family at a time of crisis, France's Prime Minister last week told French people they should not travel even to attend a relative's funeral.

So what happens if you are caught without a form, or travelling for a reason that is not on the form?

Police are out doing checks on the street and at checkpoints on the road and you risk a €135 fine for your first offence. They handed out 90,000 fines in the first week of lockdown.

For a second offence within 15 days the fine goes up to €200 and there's no reason you can't be stopped twice on the same journey.

Statistically pretty unlikely but theoretically possible – you could be stopped four times, and four or more breaches within 30 days can lead to a fine of €3,700 or a potential jail sentence of six months. Although no-one has actually been jailed yet, several people have been arrested for repeated breaches.

The lockdown is in place for reason – as of April 7th more than 9,000 people have died from coronavirus in France.

As hospitals battle to stay on top of the new cases and the army medics are drafted in to help, authorities have ordered the strict measures in order to contain the spread of the illness and for that reason are appealing to people to make as few journeys as possible.

So to borrow a phrase from a British World War II publicity campaign – is your journey really necessary?