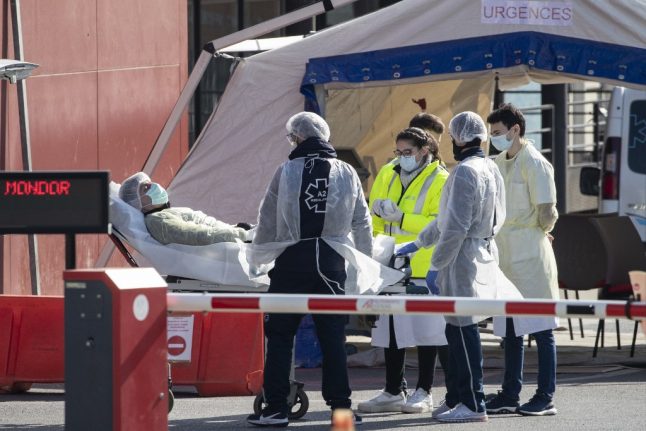 A paramedic carries out a patient on a stretcher from an ambulance to the reception of the Emergency Room, set up in a tent, in a courtyard of the Henri Mondor Hospital in Creteil, near Paris. Photo:

“We find ourselves in a crisis that will last, in a health situation that will not improve any time soon,” Edouard Philippe said after a cabinet meeting held by videoconference, as 365 deaths were reported in France in a single day.

“The situation will be difficult in the days to come,” he said.

Having started in the country's east, the epidemic is now spreading in the northernmost Hauts-de-France region, the Paris region and other areas with “an extremely high surge that puts the entire healthcare system, the entire hospital system, under enormous pressure,” Philippe said. The daily death tolls in France have been rising sharply in the last few days – from 112 deaths on Sunday to 240 on Tuesday and 365 on Thursday. The official figures only include deaths in hospital so the real toll is likely to be higher.

Philippe warned the country must “remain extremely mobilised” in the fight against the epidemic that has now killed 1,696 people on French soil.

Philippe's warning was echoed by Director General of Health Jérôme Salomon, who also predicted that the next few days will be very difficult.

During his daily briefing on Thursday, he said:  “Now there is less contact, people are going out less and get infected less. So we hope there will be fewer people getting sick next week and fewer people going to hospital.

“This is the aim of putting a brake on the epidemic and limiting the peak and saturation of the hospitals. The next days will certainly be hard but then we all hope there will be an improvement.”

READ ALSO Which parts of France are worst affected by coronavirus?

But now the pressure is rapidly increasing in the Paris region.

Hospital chiefs in the greater Paris region say they are worried about the next few days, and have issued an urgent appeal for anyone with medical experience to come to the capital and help out.

“We will clearly need help in the Île-de-France region because what happened in the east is coming here,” Frederic Valletoux, the president of France's federation of hospitals told BFM TV.

“We will be at the limit of our capacities in 24 to 48 hours,” he said. “If we let every hospital cope by itself and let every territory that has been taken by the epidemic cope alone, then we shall he towards catastrophe,” he added.

“We are filling the space to the maximum to accommodate as many intensive care patients as possible,” said Bruno Riou, medical director at the AP-HP hospital group that serves the Paris region.

“We have not yet reached the peak of the epidemic, we will have to find solutions,” he told France Inter, suggesting evacuations may be needed to take patients from Paris to hospitals in less-affected regions.

Philippe said he would announce more details of the government's response Saturday with Health Minister Olivier Veran, in particular regarding the availability of equipment, masks and virus testing.