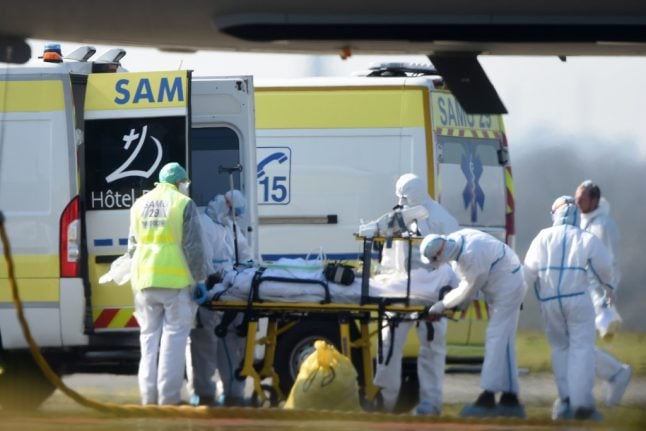 France's official number of confirmed cases of coronavirus stands at 22,302 on Wednesday, but officials admit that the real number of cases is much larger.

France is currently only testing a very narrow group of people – although health minister Olivier Véran said on Tuesday evening that much wider testing would be rolled out shortly. At present only healthcare workers, people with symptoms who are in high risk groups and people who have very severe symptoms are being tested.

This means that the real number of cases is much higher – as high as 90,000 according to one health official.

What authorities are concentrating on instead is the sickest patients, hoping this will help them manage healthcare systems without getting totally overwhelmed.

In this area there are three parts of France that are the worst affected – the eastern parts of the country, Corsica and Paris.

In each of these areas medical services are struggling to keep pace with the number of cases and local medics say they are at 'breaking point'.

The eastern départements saw the first coronavirus clusters in France and remain the worst affected – with hospitals in both Mulhouse and Colmar in the Haut-Rhin département severely stretched.

Mulhouse was the centre of one of the earliest outbreaks – centred around a church in the town – and is now the site of an army hospital built to take the patients that the hospital cannot cope with.

Patients from both Mulhouse and Colmar have also been airlifted to hospitals in other parts of France that have greater capacity, while others have been transferred over the border to hospitals in Germany.

There is also a 'coronavirus train' that on Wednesday is taking seriously ill patients from the east to other regions.

Doctors in the Hauts-de-France region – which contains the département of Oise, another early cluster zone – are also preparing for difficult days ahead as they have a high number of patients in intensive care.

Many patients have been sent to Occitanie in south west France and Centre-Val-de-Loire, which have so far seen fewer serious cases than many other regions.

Of the five doctors who have died of the virus so far, four were working in Haut-Rhin, Oise or Moselle in the east. The greater Paris Île-de-France region has the highest number of confirmed cases in France – 6,798 as of March 24th, although again the figures only relate to officially confirmed cases, usually the sickest patients.

In Paris the picture is further complicated by the fact that many patients are transferred from other areas to the specialist hospitals in the capital.

But despite having some of the best medical facilities in the country, services in the capital are still struggling.

Hospitals have put out a call for anyone with medical qualifications to come and help out – offering free train travel for the journey. So far 4,213 people have signed up – including school nurses, retired medical professionals, nurses working in private healthcare and part-time staff.

Doctors in the area say if cases continue to increase at the same rate, by Friday hospitals in the region will be at breaking point.

The major preoccupation of the regional health authority is finding new intensive care beds for coronavirus. Île-de-France currently has 1,200 intensive care beds and has set a target of 2,000 by the end of the week – using beds in private hospitals and other facilities to boost the numbers.

“We are increasing the capacity of both types of establishments, and we no longer think at all in terms of public or private,” said a spokesman from the Île-de-France health authority.

The island of Corsica was another place that reported an early cluster, particularly around the capital Ajaccio. The virus then spread around the island, overwhelming local medical services.

Over the last few days the French Navy has organised transport on hospital ships for patients from Corsica to hospitals in mainland France, particularly nearby Marseille.

There are no regions of France that are coronavirus free and the lockdown restrictions apply to the whole country as the government desperately tries to slow the transmission of the illness.

On Tuesday alone 240 people died, taking the death toll above 1,000, and the Olivier Véran says the lockdown will have to be extended, possibly to five or six weeks.