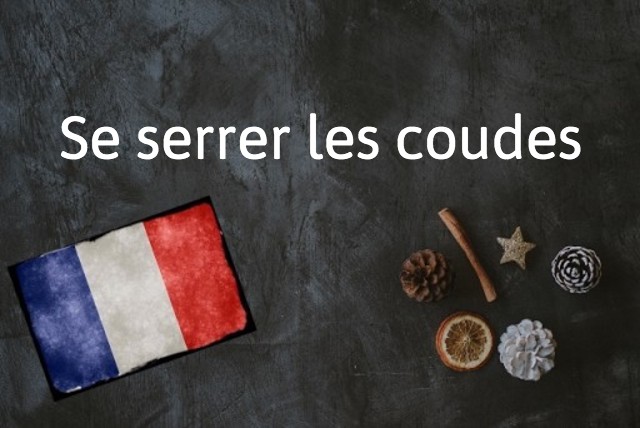 Why do i need to know se serrer les coudes?

Because in trying times, this is a beautiful and very French way of keeping our chin up together.

Serrer means 'tighten or 'press', putting pressure on something. As in the expression serrer la main, ‘shaking hands’, when two hands clasp together.

But se serrer les coudes refers to much more than just the physical act. It's the expression the French use to call for solidarity. Clasping or locking elbows is really a metaphor of 'standing together' or 'helping each other'.

En période de crise, il faut se serrer les coudes – In times of crisis, we have to stand together.

Se serrer les coudes dates back to the 20th century, according to the online French dictionary l’Internaute, which states that while it’s origin ”is uncertain”, se serrer les coudes could refer to when protesters lock their elbows together to “face adversity and show their solidarity.”

You might have heard it recently, as it's been frequently used to call for national solidarity in the fight against the coronavirus.

Health personnel working long to ensure that everyone gets the care they need have said on se serre les coudes en attendant la vague – 'we're sticking together while we're waiting for the wave to come'.

'We cannot shake hands anymore, let's stay together instead!'

But se serrer les coudes is by no means limited to the coronavirus crisis. It can refer to the joint act of getting a business up on its feet

Or any other act where solidarité – solidarity – plays an important role.

Other ways of saying se serrer les coudes are
S'épauler – refers to the shoulder instead of the elbow, but means the same (supporting someone or each other)
Se soutenir – support each other
S'entraider – help each other