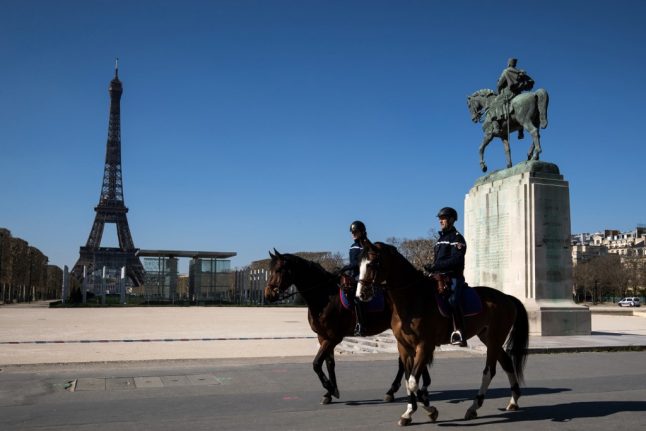 Speaking from Mulhouse, a town in the hard-hit north eastern region of France, French President Emmanuel Macron once again referred to the battle against the virus as a “war”.

He said the whole of France was grateful to the health workers who were on the frontline “in a war against an invisible enemy”.

“The whole nation is behind them and grateful. We pay homage every day. The nation is by their side at all times,” he said, as he promised to launch a “massive investment plan” to “revalorise the hospital sector.”

“We owe them that,” he said. “They save lives. They do everything in their power,” he added whilst commending their “exceptional courage”.

He announced a huge investment plan for hospitals would be put in place but that health workers are paid more for all the overtime they putting in.

The president also thanked those on the “second line” – the supermarket workers, deliverers, cashiers, the workers who are keeping France functioning during the period of confinement.

Macron also thanked those “staying confined in their homes” for “slowing down the virus so that hospital workers can do their job.”

“Everyone has a role to play,” he said.

Macron also said he would launch a new military operation, which he called Opération Resilience (Operation Resilience), which would intervene “particularly in areas concerning health, logistics and protection.” Two helicopter carriers would be sent to the south of the south Indian ocean, close to Mayotte and La Réunion.

“We are at war,” he said. “We’re only at the beginning, but we will persist.”

In the last 24 hours, 231 people had died from the coronavirus, he announced.

This number does not include those who might have died from the coronavirus at home or in retirement homes, however, only those who have died in hospital. That means that the real coronavirus death toll is likely higher.

Salomon underlined that more than 86 percent of the people who had died were aged over 70 years old.

Currently 2,827 people were in intensive care.

“It is a considerable, exceptional number over such a short time and for one single illness,” Salomon said.

“Our top priority is to prevent that the intensive care beds in the most affected areas of the country fill up.”

READ ALSO: Which areas of France are the worst affected by coronavirus?

Currently only certain categories of people are tested, leading officials to say that the true number of cases in France is much higher than official figures.

More than 11,539 people were in hospital on Wednesday, up from 10,176 on Tuesday. One third of these were aged less than 60, according to the health chief.

The number of people who have been released from the hospital however also increased, from Tuesday's 3,281 to 3,900.

“The crisis will last a long time and the coming days will be difficult,” Salomon said. “We will experience collective and individual tragedies.”

The scientific council specifically selected to advise the government on how to handle the coronavirus crisis has said at at least six weeks of lockdown may be needed.

“Everyone has a major role to play in limiting the spread of the virus,” Salomon said, reiterating the French government’s repeated call for everyone to “stay home.”