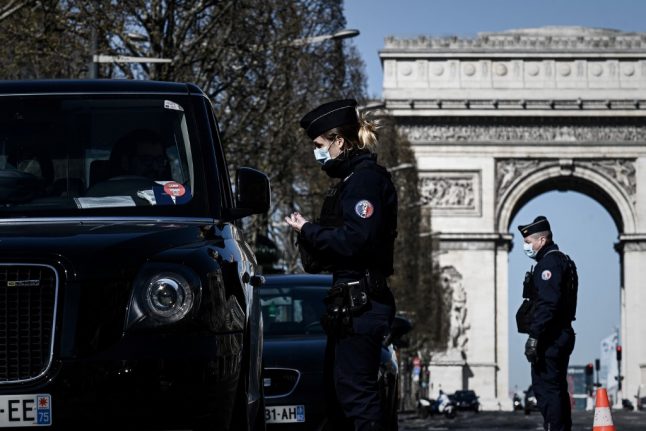 Anyone not complying with the lockdown rules in France face a €135 fine. Photo: AFP

France has been in lockdown for a week now, in a national effort to halt the spread of the coronavirus that has taken hundreds of lives and put a heavy strain on the country's health system.

The government has told everyone to stay in their homes and issued strict rules on movement, banning all outside activities except a few listed exemptions.

Anyone leaving their home must bring a valid form, available on the government's website (link here), in the event of being stopped by police.

So what do you risk if you do not comply with the rules?

What began with a €38 fine for breaking the lockdown was increased to €135 the very same day.

You can be fined if you don't have a form, or if you are too far from home while exercising (the new decree published on Tuesday sets a limit of 1km from home and for one hour only for exercise) or if your reason for being out does not fit the definitions of essential journeys.

You are also only allowed one trip out per day, so if you're stopped going out for groceries then the same officer sees you going for a run you risk a fine.

Police on the ground do have some discretion, so if you're lucky you may escape with a warning the first time.

A second breach registered within 15 days of the first breach will be punished with a €200 fine.

Anyone who breaks the rules four times in 30 days risk a €3,700 fine and up to six months in prison.

This was the case for a man in the Yvelines département who risked six months in prison for not complying with the government's rules, according to French daily Le Parisien. Although the man had not breached with the rule four times, he had violently “resisted” a police control on a walk without an attestation form, Le Parisien reported. The man was fined €1,000 in damages.

French police said they issued more than 4,000 fines just the first day after the lockdown was installed.

On Sunday March 22rd, five days into the lockdown, the number had topped 91,000, according to authorities.

France's Interior Minister Christophe Castaner has previously said the fine could rise to €375 if people continue to flout the rules.