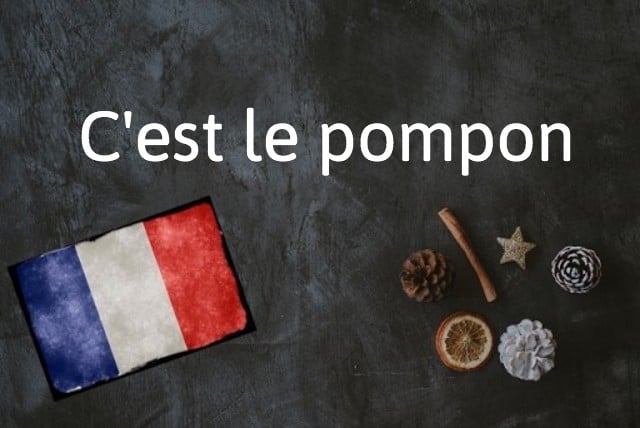 Why do I need to know c’est le pompon?

It might come in handy over the next days and weeks..

It's used about something negative and unexpected, which comes on top of a lot of other things that weren't great either.

Use it like this
Je ne le crois pas. Non seulement nous sommes confinés, mais là ils ont annulé l'Eurovision aussi. C'est le pompon! – I don't believe it. Not only are we on lockdown but now they have cancelled Eurovision too. That's the last straw!

Pompon is what in English is known as a tassle or pompom, “knit together by textiles to decorate furniture or clothing,” according to the online dictionary l'Internaute.

However most French people associate it with the little red pompom hanging on the front of the hats of French marines.

If you're in the south west you might hear c'est le pompon sur la Garonne (the river running through Toulouse).

Legend has it the expression comes from a visit of Napoleon III to open a bridge over the Garonne. It was such a windy day that the pompom of his hat blew off and landed on the river, giving rise to the expression.

C'est le bouquet means nearly same, but it's less used. It refers to “the end,” of something good – a show, a concert or a firework spectacle. Le bouquet was that dreaded moment when the curtains closed.

Another option, which has a similar albeit slightly different meaning, is the expression we got used to hear from the 'yellow vest' protesters during the height of their movement:

C’est la goutte qui fait déborder le vase – That was the last drop that made the vase overflow.

However this expression implies that there was an underlying social anger that now has been released (seeing as the vase is overflowing).

C'est le pompon does not imply any overflowing of the sort. It's more like saying that something is “the cherry on the top” if you strongly dislike cherries and the icing below was also not your favourite.